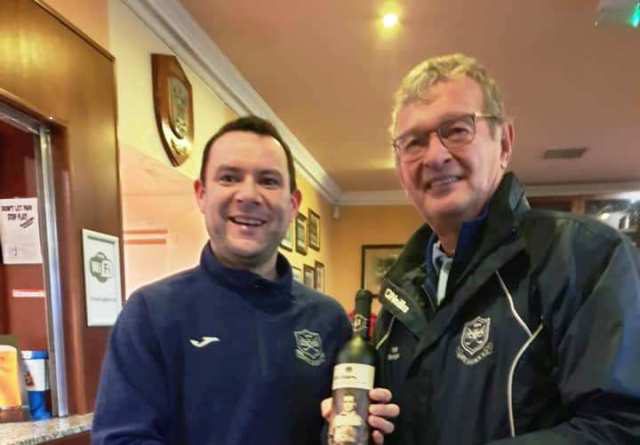 North Down fifths entertained Instonians fourths last Saturday in Comber in what is likely to prove the definitive game for promotion from Junior 5.  First and second in the table heading into the weekend, both teams needed a win to keep the promotion fate in their own hands.

North Down started the livelier of the teams and slick passing and direct runs into the Inst 25 resulted in an early series of short corners. Chris Murray worked well down the right side of midfield interconnecting well with Ryan Millar who had a superb game in attacking centre mid. The rotation of the forward line meant the home attack stayed fresh and were eager to get in at goal at every opportunity.
The main incident of the first half came when Peter Shields got into a clear shooting position from a short corner only to be assaulted from the back by an Inst defender.  Shields still managed to keep his balance and pushed firmly into the Inst net.  As both teams were lining up for the restart, the Inst umpire rather unbelievably disallowed the goal for being too high being the first shot from a short corner but there was no deliberation with the other umpire. The players did well not to let their frustration spill over into the game and it remained 0-0 at half time.

After the break North Down continued where they left off. James Stewart and Adam Skelly in midfield worked tirelessly on the left and Davy Moreland  showing his experience winning free after free by drawing almost every Inst player into fouling him.

Inst did break on the odd occasion, however the home defence, marshalled superbly by Curtis Hastings and Gavin Rogers, were never in any real trouble with Ryan McKee in nets barely touching the ball in the second half.  The breakthrough finally came after sharp passing in midfield from Shields found Nathan Grimshaw who worked into the Inst circle and scored with a clinical finish.  More chances came and went with Matt Murray coming close on a few occasions from short corners, almost breaking the post with one effort.

Finally North Down got the cushion they deserved with a wonder goal! A tenacious run from Greg Bell caught a ball that was destined to go over the back line.  He managed to control it then squared the ball perfectly for the diving Ben Bond who finished with aplomb.  The match then petered out as North Down were masterful in control and Inst had little to offer, their race was run.  Feature of North Down’s real team display was an absolute beast of a performance from veteran Peter Shields, pushing North Down forward and appearing everywhere when needed forward and back.  This result means that the promotion fate is firmly in the fifths own control.