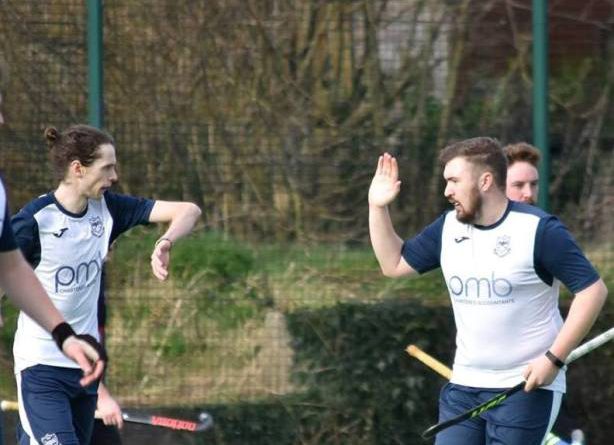 North Down entertained South Antrim at Comber Leisure Centre on Saturday hoping to get their Premier League campaign back on track after a disappointing result last week at Bangor while South Antrim were hoping to get revenge for an earlier 4-3 defeat in their campaign.

Both sides tried to play attractive attacking hockey at every opportunity. It was North Down who started the quicker and put the South defence under early pressure. They got their reward after 10 minutes when James Clark made a strong run and found Jonny Moore unmarked in the circle, his shot was saved but leading goalscorer Josh Gilmore was on hand to slap home. South Antrim equalised after 15 minutes  following their first real attack.  A short corner was awarded after an unnecessary tackle in the circle and their weak effort from the penalty corner managed to find the back of the net.  Another piece of poor defending gave South their second minutes later. They threw a high ball into the North Down 25 and under no real pressure the defenders failed to collect the ball and allowed it to get to the circle.  In a valiant effort to clear the ball a South Antrim attacker was obstructed and the umpire awarded a penalty which was calmly slotted into the corner of the net.  Both sides created half chances but were unable to convert.

The second half saw North Down exclusively in control but the Lisburn visitors were always dangerous on the break.  Jonny and Ross Linter were combining well on the right and their play won a number of corners but unfortunately on the day their routine was not working and the away goal remained intact.  On one occasion North Down thought they had won a penalty when a defender’s foot appeared to stop Andrew McKibbin’s effort on the line but the umpire waved play on.  North Down were now encamped in the opposition’s circle but were unable to break down a solid defence in which the keeper was outstanding. The closest they came to equalising was a corner effort from Phil Templeton which flashed wide of the goal and South Antrim were glad to hear the final whistle after surviving the second half onslaught unscathed.

North Down entertain Kilkeel in the league on Wednesday at Comber Leisure Centre at 8.30 pm and then on Sunday travel to Stormont for their Irish Trophy semi final against Civil Service. Push back in that one is at 3.30 pm.