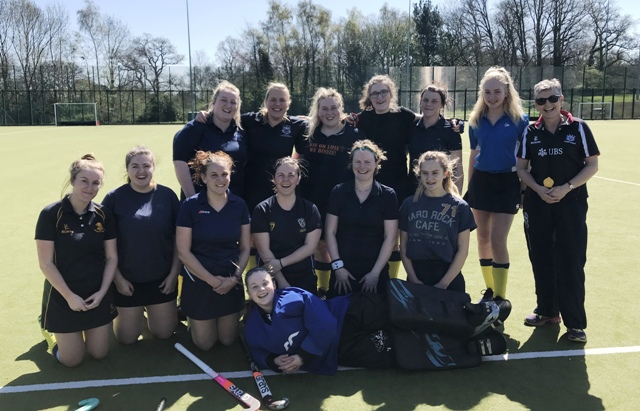 On Saturday the ladies fifths embarked on their last game of the season against Queens fifths at The Dub. It was all to play for as double points were up for grabs.

From the whistle Queens came on the attack with defenders Karen Jackson, Cara McConnell, Kathryn Rogers, Rachel Quigley and goalie Fiona Emerson trying hard to win the ball back. Tireless efforts with midfield and forwards pushing up led to Queens winning a corner before half time and going ahead 1-0.

With the hottest day of the year so far, the half time break consisted of talking tactics and hydrating. A quick change of lineup pushing Karen Jackson up front and Keri Portinga to the midfield helped North Down pressurize the Queens goal. Some chances came early from Abby McCague but the Queens well drilled defensive line cleared the ball up to their forwards to create more chances for them to score. Karen Jackson, Camy Chandler and midfields Emma Johnston and Staci Maxwell put in an exhilarating attack in which Karen Jackson scored a terrific goal to even the score.

However, the heat and a tiring North Down team saw Queens take the lead after winning numerous penalty corners and scoring a deciding second goal.

This was a fantastic team performance for the last game of the season which everyone thoroughly enjoyed! Thanks to Moe Emerson for umpiring.