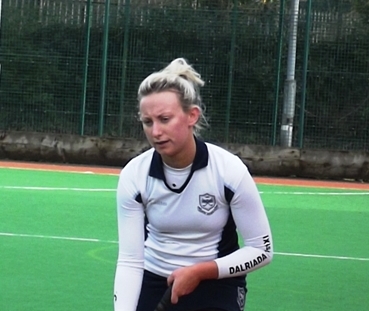 Spoilt with another Saturday of glorious sunshine North Down Ladies seconds travelled to Deramore to play Belfast Harlequins thirds in the final league game of the season.   Belfast Harlequins also provide the opposition for the Intermediate Plate final on 12 May so this was always going to be an interesting affair as each team sounded each other out. North Down were missing a number of regulars so with a squad of 12 hard work was always going to be order of the day.

With a half time team talk based around better pressing, passing and ball retention North Down started brightly only to go a goal down to a rebound from a short corner. The heat played its part and the game opened up and chances came and went for both sides. With 10 minutes to go North Down threw caution to the wind pushing Laura Campbell into midfield and going 3 at the back. This increased North Down pressure which was rewarded when Ashleigh Hamilton scored from close range.

A competitive match finished 1-1 which was the right result.   And so the season finished with a credible mid table finish with 24 points and a record of 6 won, 6 lost and 6 drawn and a goal difference of plus 2.  With the second best defensive record in the league we are proving hard to beat but as a team we must take our chances.

And so to the final on 12 May which, based on this match, is going to be a close affair.

Many thanks to Sam Brown for umpiring.