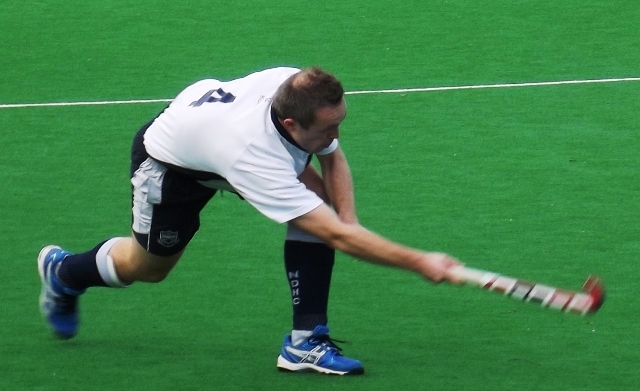 North Down welcomed Raphoe to Comber in the Ulster Premier League hoping to gain revenge following the Irish Hockey Trophy defeat earlier this year.  The home side started quickly and after two minutes took the lead.  Sharp link up play between Andrew Boyd and Ross Linter resulted in the latter crossing for Josh Gilmore who showed great composure before twisting and scooping the ball past the helpless Raphoe keeper.

To Raphoe’s credit, they did not let their heads drop and caused the North Down defence some issues through well placed aerial balls.  The away side equalised from a short corner.  North Down failed to clear their lines from the initial effort and the rebound was tucked away.

A firm half time team talk from player coach Gareth McKeown seemed to have the intended impact as North Down duly upped their game in the second half, dominating possession and with most of the play being confined to the Raphoe half.  The home side regained the lead via a short corner with Philip Templeton hitting the backboard with a solidly executed drag flick.  However, Raphoe once again responded, equalising from the penalty spot.

Jonny Moore continued his scoring streak sliding in at the back post to tuck away a Gareth McKeown cross to restore the lead to 3-2.  As the clock ticked away, North Down won a series of short corners and from one of which, Ross Linter hammered home to secure the points.  Raphoe were reduced to ten men after their skipper was shown a red card for a combination of robust tackles and poor discipline with the final score finishing 4-2.

This victory was North Down’s third in a row and they will be hoping to carry the confidence gained into the remaining league matches to ensure a strong finish to the season.