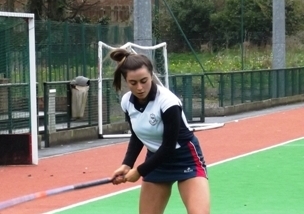 North Down ladies fifths hosted Armagh seconds in the second round of the Minor Cup at Regent House last Saturday. The match started with Armagh winning a penalty corner, however the North Down defence was secure and with the midfield pinging the ball up front for forwards Sarah Moreland, Abby McCague and Debbie Sherlock to catch Armagh had to be on their toes to keep them out. There was plenty of midfield action resulting in two even sides fighting to win the ball but it remained scoreless at half time.

Following a motivational team talk North Down started the second half with enthusiasm and fire. Armagh attacked from the whistle with Helena Press in goals making some super saves. Centre back Kerry McCord and left back Saioa Oscoz, made some super passes to midfield Kathy Taylor and Staci Maxwell which finally won time in the Armagh circle. However, on the break Armagh went ahead after a number of attempts on goal to make it 0-1. After this the fifths fought back winning a number of corners and had Armagh on the back foot with some good possession play. Sarah Moreland saved the day for the home team when she evened the score with a rebound goal just before full time. With no extra time now allowed in Ulster Hockey, penalty flicks were then taken. Helena Press made some impressive saves and after a nail biting session North Down came out on top to progress to the next round of the Minor Cup.