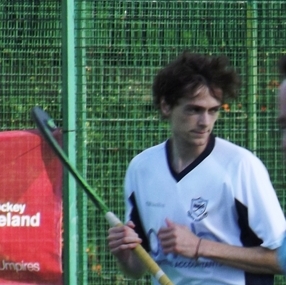 North Down, in their quest for a top seven finish in the Premier League, dropped a disappointing two points at Comber on Saturday following a 1-1 draw with Newry

North Down dominated the game for long spells but Newry’s spoiling tactics did not allow them to play flowing hockey and as frustration set in players from both teams were given green and yellow cards.  North Down were first to pressurise the Newry circle but were unable to create any clear cut chances.  Newry won a short corner and with their only shot of the half saw their effort taken off the line by Mark Linter.  At the other end and with only minutes of the half remaining North Down won a corner and Gareth McKeown’s effort hit a defenders body on the line.  Josh Gilmore stepped up and converted the resulting penalty low to the keeper’s left.

Newry equalised after 10 minutes in the second period.  McWilliams was allowed to skip past some poor tackling before mishitting the ball past a helpless Coates.  North Down pressed for a second goal which their play deserved but the Newry keeper made two splendid saves to keep his side in the game.  Firstly he made a great save low to his right from a McKeown corner and then with ten minutes remaining from a penalty flick awarded after a deliberate foul in the circle by a Newry defender.  Tempers flared and two Newry players received yellow cards but North Down were unable to take advantage of this.

North Down thought they had scored the winner in the dying minutes when James Clark weaved his way into the circle and unleashed a reverse shot into the corner of the net. But the umpire disallowed the goal as he was of the opinion that the ball was struck from outside the circle a decision which was much debated after the game.