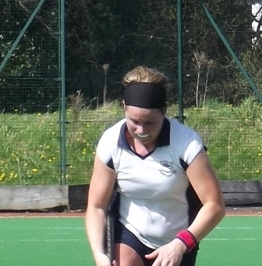 Rainey started very strongly with relentless attacks but North Down managed to survive until the 25th minute when captain Maxine Taylor was hit on the thigh on the goal line and a penalty flick was awarded. Having already made numerous saves Linda Marshall was powerless against the force of the flick and the score was 1-0 at half time.

The second half was a very heated affair Rainey losing one of their players to the sin bin.  North Down tried to take advantage of this with Marion Sanderson and Hilary West driving the ball into the circle, Lynsey Stevenson working tirelessly in centre midfield and Jill Jack working well as left back coming on for Beverley Brittain but it wasn’t to be.  North Down continued to stay composed and rise above the stick tackles and verbal abuse but just could not get the ball through to their forwards so the final score remained 1-0.