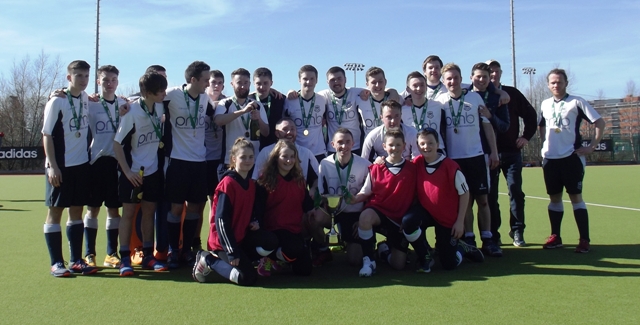 North Down travelled to Dublin last Saturday to play South Antrim in the final of the Irish Trophy.  In glorious conditions and in front of a noisy but very welcome support both teams put on a display which matched the occasion.

South Antrim started stronger and took the lead after 10 minutes following a short corner. The initial shot was saved by Andy Coates but his defenders were slow to react and the rebound was hammered home.  This spurred North Down into action and they got to grips in midfield with Chris Speers having a sound game. They equalised in a similar fashion to South.  David Shepherd’s shot at a corner was saved and Mark Shannon was on hand to slot home the rebound.

North Down took the lead 15 minutes into the second period from a corner.  Josh Gilmore delivered the perfect push out and Shepherd flicked high into the net.  Play swung from end to end as both sides probed for openings.  With 10 minutes remaining on the clock South Antrim equalised.  The ball broke to the left winger and his cleverly placed shot gave Coates no chance.  With time running out and the possibility of a penalty shoot out looming up stepped Mark Shannon and from close range made no mistake to put his side in front.

With 2 minutes remaining South Antrim were awarded a series of corners but Coates and his well marshalled defence held firm.  The ball broke to the other end and with seconds remaining North Down won a corner but there was insufficient time remaining to complete the set piece.

This was a fantastic performance by all the players and skipper Ross Linter proudly stepped up to receive the trophy from Ivy Dennis the Irish Hockey President. The celebrations began and continued long into the night at the Club’s Annual Dinner Dance.  Thanks to all those supporters who made the long journey to give their support to the team.