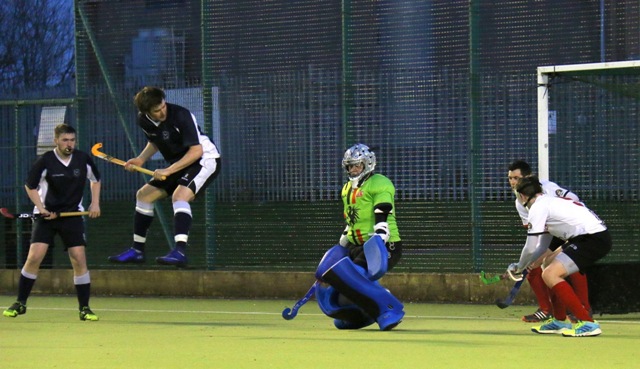 North Down travelled to Lough Moss on Monday evening to play Annadale in their final league game of the season and gave a senior debut to young Chris Murray.  Still suffering from a hangover after their Irish Trophy victory at the weekend North Down put up a spirited performance before going down by 4-0.

Annadale opened the scoring after 15 minutes from a short corner which perhaps should have been cleared.  A strong run by Phil Templeton saw him burst into the circle but the final pass eluded Wilson who was well placed at the far post.  Shepherd had a couple of corners well cleared but it was Annadale who threatened to increase their lead.  They did so right on the stroke of half time when a midfielder was allowed to run through  the defence and give Coates no chance.

The second half was only minutes old when Annadale got their third.  A poor clearance from defence gave turnover ball and the winger ran in to score with a reverse shot.  Minutes later Annadale were awarded a very dubious corner after Templeton had cleared off the line and they scored with a strong shot into the corner of the net.  Annadale dominated possession but were unable to break down a resolute North Down defence.  McKeown stole the ball in his own half and outpaced the Annadale defence before shooting over.

The final whistle sounded with no further score to the relief of an exhausted North Down team who now wait for the draw in the Anderson Cup to complete a very satisfactory season.