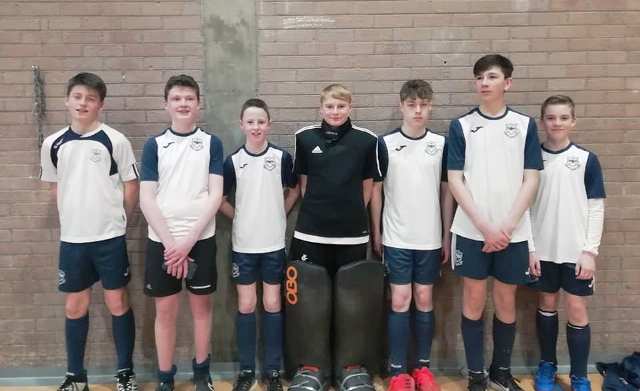 Boys Under 15 Indoor Tournament report at Antrim Forum on Sunday. All the boys played so well in what is a completely different game to what they normally play, added to that they were playing in the smaller hall so every game was very tight.

They drew 0-0 versus Inst on the first match to get them off to a good start. In the second match Banbridge managed to squeeze out a 1-0 scoreline on a dubious umpire call but that’s the way it goes. Portadown was a goal fest in comparison 2-2 with Mathew and Oliver both scoring, Portadown pulling back level near the final hooter.

The boys started well against Lisnagarvey and didn’t allow them to get much play and then a couple of 50/50 calls against the Garvey boys and the cracks started to appear with a goal for North Down, Thomas with a nice run and finish and a green card for an opposition player for back chat to the umpire. Garvey got another late goal to equalise but great play by North Down.

This was followed by a 0-0 draw against a Mossley team who had given them a bit of a thumping in the Tier 2 league with another great defensive display from Daniel and Matthew. The last match of the day versus Antrim and Scott got a nice score and Finn was unlucky to hit the post. 1-0 to North Down is how it finished but it could have been more but true to form the Antrim boys got a bit more physical towards the end. Well done to Alex for all his efforts saving one penalty flick and he would have saved another if the umpire had placed the ball 2 metres back actually on the flick spot!

Thanks again to all the parents and Julie Fisher for the support/kit etc.