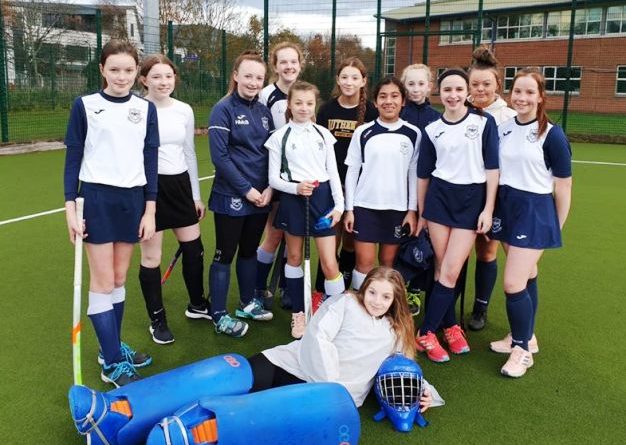 Our Under 15 girls played Ballynahinch at Regent House on Sunday.

The girls had a shaky start. Within a few minutes the visiting team had gone a goal up and proceeded to apply lots of attacking pressure. It looked as if it was going to be a hard day at the office but credit to our defence of Angelique, Eilidih, Tess and Hannah as they dug deep and began to settle and find their form and shape as they then worked solidly breaking down the visitors attack. The North Down girls began to build their play and create chances going forward. We moved to a midfield four of Sofia, Emma, Shannon and Jessica who worked tirelessly both in possession and when the ball was turned over, they all put in great effort to get back and support. As half time approached the home side began to enjoy creating havoc in the visitors defensive area and displayed some great teamwork. Then the equaliser came. The ball was crossed from the right into the circle and after a couple of clearances from Ballynahinch broke down, Emma Heron made no mistake and slotted the ball home into the net.

The second half was a much more even affair. Our forwards of Leah, Lara and Abbie saw more of the ball and showed great effort in attack. North Down played some super hockey – linking passes and showing great determination. As the minutes ebbed away, it just wasn’t meant to be as the visitors got their winner to make the final score 2-1.

To summarise – super proud of the girls performance this afternoon against a strong side. Their work rate, determination and never give up attitude was fabulous to watch and absolute credit to themselves. Even though we lost, the match play was so good – it didn’t feel like a loss – the girls were still smiling at the end.

Player of the match was jointly awarded to Sofia and Emma.  Finally, mention to super star Idoia Oscoz who stepped in and donned the goalie kit at short notice this afternoon. Only the fourth time in nets but you were brilliant !

Thanks to Darren Toombs for a great job on whistle duty and to all parents for their support !