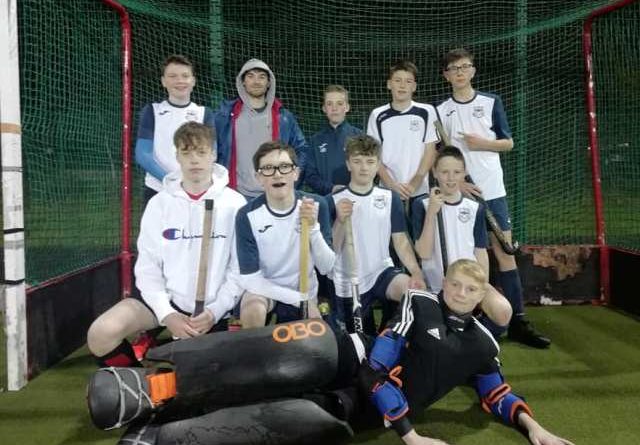 What a start to our U15 Boys T2 league! Sunday’s match was versus Antrim at Regent.

To start with I need to thank the parents for their support as with only 9 boys in the squad (8 a side matches ) it requires commitment from them all for this new format – so thank you parents. This squad hadn’t played together as a team so we weren’t sure how they’d gel but the match was started by Antrim and from the first minute North Down had all the play and pressured Antrim continually. Really only a matter of time before we had the ball in the back of the net to go ahead 1-0.

To say the boys were buoyed by scoring would be an understatement! The boys continued to pass the ball around using space and time to their advantage. The second goal came quickly after more sustained pressure, 2-0. Then Antrim were awarded a penalty flick on a most dubious decision against Alex our keeper. They duly converted, 2-1.

Ben moved the boys around different positions on the field for the 2nd and 3rd quarters and Antrim were able to apply some pressure, some great defending from Rory, Daniel and Matthew and goalkeeping from Alex kept the scoreline at 2-1. With some great play from our boys in mid field with some nicely weighted through balls from Oliver allowing Callum and Scott to increase their tally to 2 a piece, 4-1, there was a lovely set piece penalty corner goal in there with Scott finishing it .

For the 4th quarter and to ensure victory Ben moved them around back to their stronger positions and Callum managed to poke a goal in to bag his 3rd. Well done to Finn stepping up from U13s to fit right in with the U15s, great match for him. Thomas played well up front and was torturing the Antrim defence with his height and power, he was unfortunate not to score. Final score 5-1. Well done boys.

Thanks to Julie for her support, to Ben for his enthusiasm and coaching, to Rhys for being a great umpire and with special thanks to the wonderful Mrs Smith for pulling the team and matches together.

We now move onto Mossley away this Friday night.