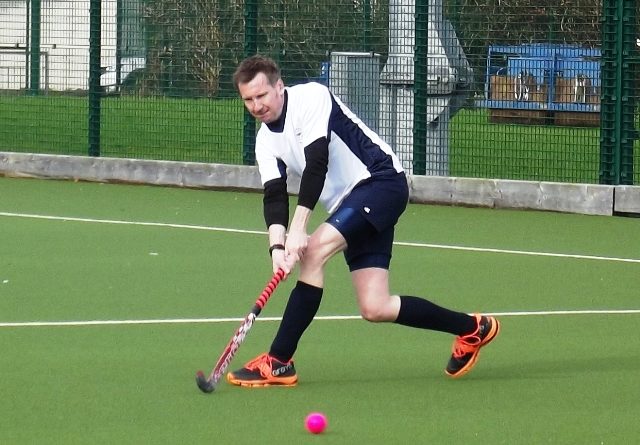 A proper senior game of hockey took place in the 4pm slot at Enler Park with the robust Antrim seconds in town looking to bully their way to 3 points.  A pre-match team-talk explaining the importance of keeping calm, not talking back to the umpire and not lowering standards set the fifths up for the game.
Two minutes in and Chris Murray was assisting the umpire with his enquiries for a heavy challenge and, although not endorsed by management, this attitude typified North Down for the whole match with the crowd important for their support.

The fifths used the ball well playing the superior hockey by some way. Gavin Rogers and Davy Mo interchanged well using the right and left but getting a lot of joy down the right hand side with Rhys Barratt and James Stewart.  Antrim seconds were physical however not a single North Down player took a step back. A goalless first quarter transitioned into the second quarter with North Down still on top in terms of hockey. Both full backs were pushing forward and causing Antrim no end of trouble.  Michael McClelland marauded into the Antrim circle all the way from left back, his stinger of a reverse tomahawk was going just wide, when the cat like reactions of Andrew Linter diverted the ball into the net and it was deservedly 1-0 to North Down.

Antrim upped their tempo with only minutes remaining in the half and North Down for the first time retreated into their own 25 and a short corner was awarded with seconds left on the clock.  Antrim duly dispatched the ball low into the corner of Roger Graham’s goal and it was 1-1 at half time.

Into the second half and Antrim were starting to get themselves a foothold in the North Down half with their centre forward causing a few problems for the home defence but it was a testament to their tenacity that not a single short corner was conceded in the second half despite numerous circle penetrations from Antrim.  So,
1-1 going into the final quarter and the game was anyone’s.  The decisive breakthrough came with only 3 minutes remaining on the clock. Good interplay by Angus Johnston and Peter Shields led to Simon Wilcock poaching a goal at the far post.  Antrim pushed for the equaliser but again the home midfield and defence stood firm, the support on the sideline found their voice and saw the Comber lads home.