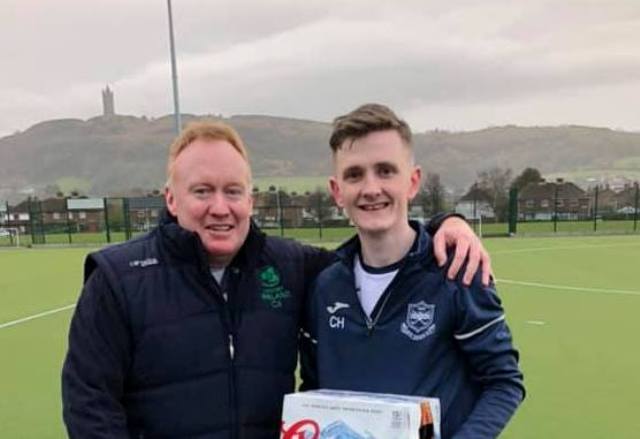 It was a bad day at the office for a plucky Ballymena squad who travelled to North Down fifths at Regent House School last Saturday.  North Down, aware that a win would virtually secure promotion, were sent out with a very positive mind set.

Right from the off North Down passed and moved, dazzling the Ballymena boys with the speed and accuracy of passes. From the push back North Down played the ball quickly down the right, Ryan Millar beat his man and put a slick pass into Matt Murray in the inside right channel, a quick cross to the unmarked Peter Shields at the top of the circle and a smart reverse finish meant it was 1-0 after only 25 seconds.

This actually proved to be more unsettling for North Down who thought the walk in the park had begun. Ballymena rallied and steadied their ship. North Down struggled to get into the game and uncharacteristic poor passing gave the ball to Ballymena in midfield time and time again. The stress of winning to be promoted was maybe taking its toll as Ballymena pressed and deservedly got an equaliser midway through the half.  North Down very gradually got themselves back into the game, scoring a well hit short corner from Matt Murray minutes before the half time whistle.
A more than usual stern team talk from the home coach and the fifths were focused for the second half.  Despite an early Ballymena press North Down withstood an early scare but with another crisply struck short corner from Matt Murray it was 3-1, the breathing space the Comber boys needed.  With 10 minutes to go, Ben Bond arrived fresh from a week in the Swiss Alps to chip in with 2 well taken goals. Murray completed his hat trick with a superb reverse finish high into the net past the beleaguered Ballymena keeper. A final short corner goal from Murray and the score was a slightly flattering 7-1 to the home side, Matt Murray scoring four times.

Instonians fourths, their main promotion rivals, were beaten by likely league winners South Antrim fourths thus sending North Down fifths up to Junior League Four.  Among the teams they will not be meeting next season is the North Down fourths string who, without playing on Saturday, have comprehensively won Junior Four to reach Junior Three in successive promotion years!