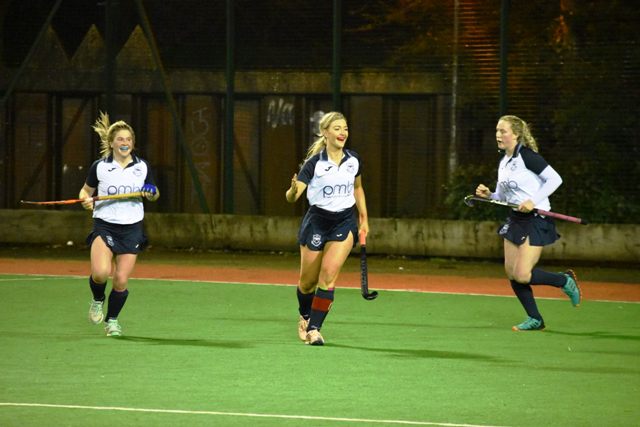 Last Wednesday night the ladies first entertained Portadown at Comber Leisure Centre and with Portadown just above North Down in the league this was an important game.

North Down edged the opening period as their forwards were making dangerous runs behind the high lying Portadown defence. After ten minutes the first clear cut chance was created when Alex Boyd was played through by Lauren Brown. 1v1 with the keeper Alex was calmness personified, rounded the keeper and was about to put the ball into the net when her stick was blocked. The umpire blew the whistle and gave the obvious decision – a free out for Portadown.

North Down continued to look dangerous and after fifteen minutes good hold up play by Amy Kimber saw Olivia Brown receive the ball and play a sublime pass to the over lapping Selina Lewis who took the ball in her stride and finished superbly. North Down doubled their lead two minutes later when good pressure in midfield saw Selina Lewis win the ball and feed Rachel Lucas who played a great ball to the supporting Lauren Brown for an excellent goal.

North Down took the pressure out of the game, dropping deeper and allowing Portadown possession in their own half but denying any entries into the circle with good work rate. With two minutes to go until half time North Down gifted Portadown a way back into the game with a loose pass giving a Portadown forward an opportunity that she took very well.

North Down started the second half positively and after ten minutes good play by Amy Kimber created a shooting opportunity for Rachael Murphy that was stopped by a defenders foot. From the resultant short corner Lauren Brown finished off a well executed short corner to re-open their two goal cushion.

North Down controlled the rest of the game with Kathryn Sinclair prominent in snuffing out any signs of danger from Portadown. North Down continued to look dangerous going forward and Rachael Murphy was unlucky with a reverse stick shot.

This was a good game for the watching crowd with both teams looking to play an attractive brand of hockey. North Down deserved their win as they looked more dangerous throughout the game when in possession of the ball.