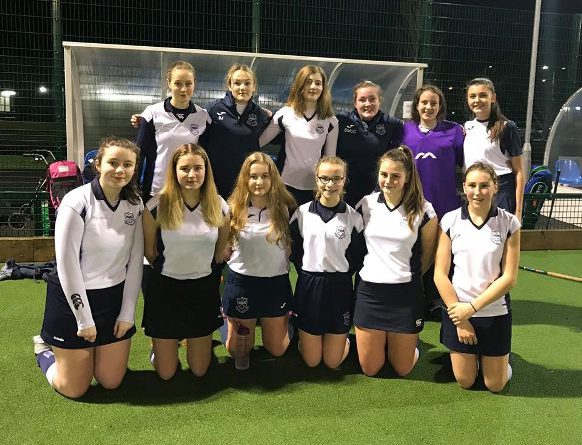 On Tuesday evening our under 15 Girls Development Team played a league fixture against Ards. Thankfully the rain stopped and it turned out to be a nice evening compared to recent weather conditions.

During the first ten minutes North Down had the greater share of the attack. Forwards Grace Harrison and Iris Mack attacked well down their respective wings, while Amy Ellison used her skill and pace in the middle of the pitch. Ards then began to counter attack but the defence of Erin McConnell, Alaia Oscoz, Zara Oliver and Shan McConnell worked well together and kept most of the threatening play out of the circle. North Down were the first to win a penalty corner but unfortunately Amy’s strike at the top of the circle just went wide of the post. Half time score was 0-0.

The second half began with Ards having more attacking pressure, but the midfield of Evie Thompson, Zoe Pritchard and Evie Gallen worked tirelessly to support the defence in clearing the threatening play. Shan McConnell made well time tackles at the back. Goalie, Hannah Cunningham was called into action and made some super clearances, especially from close range play.

The defence and midfield started to link better together and began communicating well with each other which resulted in the creation of good play. Iris Mack who had moved into midfield, showed great energy and determination and worked well with Grace Harrison. Laura Sharp chased hard and was unlucky not to score when the ball came across the circle. Amy Ellison also came so close to breaking the deadlock with some thundering strikes, one of which looked an absolute cert but a super save by the Ards goalie denied her.

A very enjoyable match, played in super spirit between both teams and a fair result. Thanks to the Ards coaches for organising, sharing balls, masks and for turning the rain off!

Thanks to Hannah for stepping into goals at short notice and a big shout out to Katie Walls, who we hope is on the mend and feeling better.

Finally, one of the Ards players, Alisha Boyd (big brother and sister play for us) encountered a raised ball, which resulted in a couple of stitches above her eye. We wish you a speedy recovery Alisha!