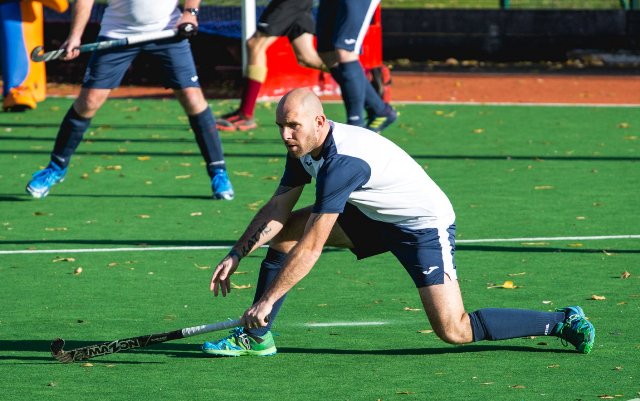 North Down controlled much of the opening stages and went one up after 22 minutes as Adam Tate roofed one on the reverse from close range. Marking was however too slack and one of the few chances Cookstown created resulted in a short corner two minutes from half time which they duly dispatched with their signature drag flick.

The message to the home troops at the break was to tighten up on the marking and move the ball quicker! The Comber men did just that and continued to control the game creating excellent chances and at last some short corners.  On 43 minutes Sam Pyper put North Down ahead again when he somehow squeezed the ball through the keeper’s pads for it to trickle over the line to make it 2-1.  Two minutes later Nathan Grimshaw pinged a drag flick into the roof to make it 3-1 and it looked as if the three points were in the bag. Well, not quite! Cookstown were not done yet and seemed content to look for short corner after short corner to utilise their drag flick. Andy Walls bravely charged down at least three penalty corners even taking one on the head, but a goal was coming and when a stroke was awarded for the ball striking Colin Mockford on the line, it was narrowly dispatched past Ally McArthur to make it 3-2. Further errors, more penalty corners and with 12 minutes to go, Cookstown tied the game at 3-3.  North Down had a late chance to take the win but a double save off Andy Shannon meant that the points were shared.

It was disappointing not to keep control of the lead but a point was probably a fair result in a tight competitive game.