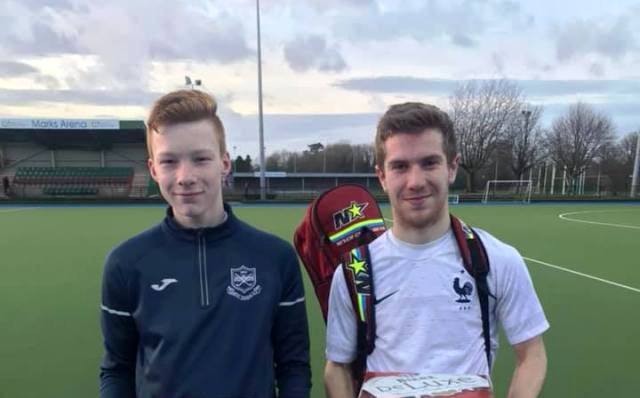 North Down fifths travelled to Antrim Forum last Saturday to play a weak, ill disciplined Antrim thirds team in the league.  With the home team putting their energies into disputes with the umpires, the opposition, themselves and even at times with the spectators the team which concentrated on hockey ran out easy 5-1 winners.

For the first 15 minutes North Down were camped in the Antrim final third. Good chances came and went but somehow the score was still 0-0. Then, from absolutely nowhere, North Down gifted Antrim a scrappy goal on 17 minutes and they took a 1-0 advantage. North Down continued to press the issue, starting at the back with Davy Moreland and spreading the ball around from side to side. The returning Ryan Millar was driving into the Antrim circle with ease, with Antrim resulting to waist high challenges at times. North Down replied 8 minutes later with a goal from a well worked short corner, Millar finishing well from five yards out.  Following the inevitable Antrim dispute and a consultation between the two umpires the goal stood.  North Down went ahead with 2 minutes remaining in the half, this time with a conventional short corner stop and hit from Peter Shields.

North Down came out of the traps quickly in the second half with more slick passing resulting in circle break after circle break.  Sam Pyper, delayed by traffic, was soon in the action and his more physical nature was suited down to the ground for the ‘robust’ Antrim backline. There was a long stoppage for treatment to Davy Moreland following a particularly nasty tackle but he recovered after a spell on the sidelines to finish the game. Eventually on 53 minutes North Down made it 3-1 with a goal from Pyper and the fourth was to quickly follow from Ryan Millar. The game was all but over at this stage but the Antrim team continued to complain with rash tackles and knee high challenges now the norm, even throwing their sticks at their visitors at one stage.  Angus Johnston polished off the result 1 minute from full time with a well worked goal put on a plate for him by Andrew Linter to make the final score 5-1 and a well deserved 3 points.

This was an excellent disciplined performance from a North Down team with many young players who ignored the confrontational attitude of the home team and just played simple hockey.  Always a winner!

PMB man of the Match: Ryan Millar and last weeks MOM in the photo, Adam Skelly.