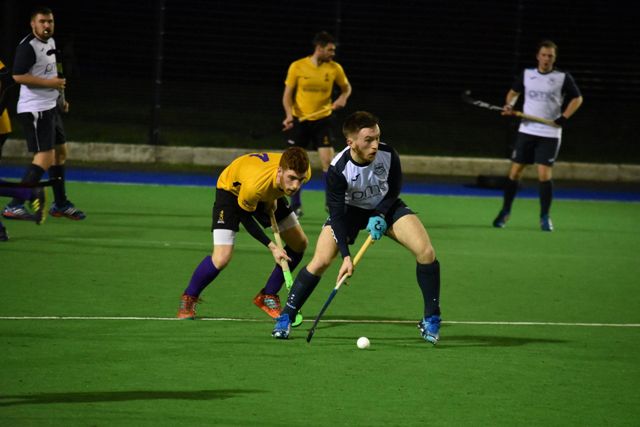 North Down had an early start to the weekend as they travelled to Shaws Bridge on Thursday to play Inst in their final game of the first phase of the Premier League. With sixth pace already secured North Down were hoping for a good result but unfortunately were defeated by 5-1.

The first half was played at a fast pace and North Down matched their opponents in all aspects of the game.  They kept possession well and moved the ball around with pace. In the first 5 minutes they created two clear chances and should have taken the lead. Firstly, Jamie Orr had space in the circle but wanted an extra touch and failed to get a shot away and then after a slick passing move Tom Donnan was presented with an open goal from five yards but his flick rattled off the post to safety. After 20 minutes Inst took the lead. They were awarded a short corner and Robinson’s weak effort found the net.  North Down fought hard and on the stroke of half time were awarded a corner which Phil Templeton smashed into the net.

The second half was a different affair with Inst dominating play. North Down lost their shape and the flowing hockey from the first half was not to be seen.  Inst had the perfect start to the half with two goals in the first 5 minutes.  The first was a solo effort when the attacker picked the ball up on the halfway line and ran unopposed into the circle and squeezed the ball past Rodgers. The second and their third goal came as a result of poor defending and from what appeared to be no threat an attacker got a touch to deflect past Rodgers.  North Down were now struggling to get out of their half and Inst pressed for further goals.  Robinson completed his hat trick with two further short corner strikes near the end to give Inst a deserved victory.  North Down will be disappointed with the result and the manner in which the goals were scored but attention now turns this weekend to the Anderson Cup with its new home and away format.