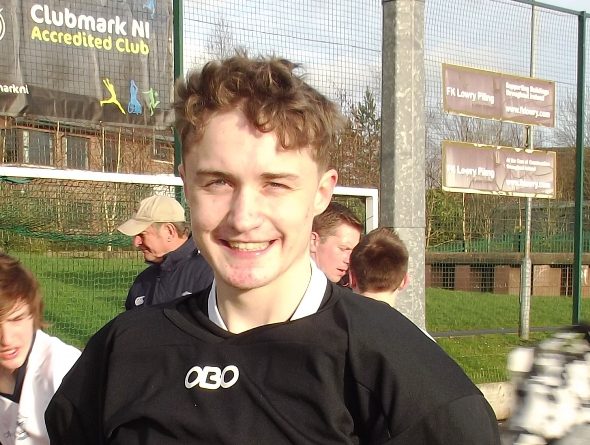 North Down fifths entertained a strong Raphoe thirds string who had travelled all the way from one the EU’s most westerly countries at Regent House last Saturday.

Raphoe, clearly strengthened by their 1st XI not playing, dominated the first section of the match with North Down pegged back in their defensive 25 for much of it. The defence stood firm with keeper Ryan McKee smothering more than one attack with alert goalkeeping. Forceful play from North Down’s centre partnership of Gavin Rogers and skipper Curtis Hastings just about kept the Donegal lads out of the circle.

Slowly but surely North Down got themselves into the game as Peter Shields and Davy Moreland started to get the better of the handy Raphoe midfield. North Down broke quickly from the back a number of times and could have taken the lead before they actually did. Another quick break from the back, good play down the right from Ryan Millar and eventually the ball fell to Ben Bond with acres of space in the circle, a cool reverse finish and North Down took a 1-0 into the break, just about deservedly.

The first goal of the second half was always going to be vital. North Down didn’t have to wait too long as another fast break through midfield once again fell to Ben Bond, yet again slapping it past the Raphoe keeper. It was a goal that ruined the Raphoe half time team talk and settled the nerves of everyone in white.  The home pressure mounted, North Down won a short corner, Shields calmly beat the first runner and slotted a well struck shot low to the keeper’s right to make it 3-0 and the contest was all but over with 20 minutes remaining.

North Down continued to play superb passing hockey breaking time and time again into the Raphoe 25 and in one attack Ben Irwin narrowly missed out on his first senior goal. In the dying minutes of the game a defensive blunder from the otherwise reliable veteran Gavin Rodgers gave Raphoe a penalty flick which was slotted home and the game finished with a 3-1 scoreline, a very deserved result for the home team.

The fifths now look forward to their League Cup semi final at home to Antrim thirds this coming Saturday.
PMB Man of the Match: Ben Bond