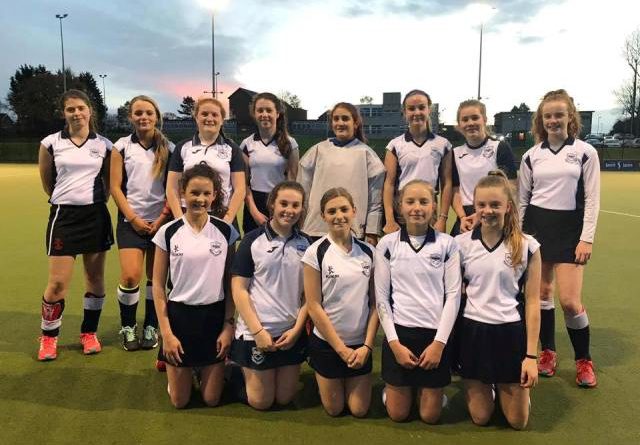 The Under 15 girls played Lurgan at 3.30pm in Lurgan on Sunday afternoon. Thank you to all the parents who got the team there and supported so well! Special thanks go to Andy Walls who umpired and brought Katie Walls along to make a great job of playing keeper.

The team began well with great attacking moves down the right by Leah Drysdale and a super attack and cross from Sophie Hoey in the circle, a shot from Emma Cochrane and then a great rebound goal from Cara Murray only 5 mins into the game. North Down had rattled the Lurgan side and they fought back with determination. The North Down defence of Katie Walls, Tilly Neild, Connie Magee, Charlotte Walker and Sarah Taylor worked tirelessly making mostly excellent clearances with only the odd ball played into the middle of the pitch for Lurgan to pick up. One such misplaced pass led to a strong Lurgan attack and subsequent goal and the half time score of 1-1.

North Down soaked up some more pressure initially in the second half but then regained composure and continued to attack well with excellent play in the mid field from Kenzi Fisher, Kate McConnell and Katie Migan. The game was looking like it could go either way when a strong attack from the Lurgan girls made the score 2-1. Captain Neve Armstrong encouraged the team and worked really hard in the midfield throughout but played really well in the second half. The North Down team fought valiantly to the end and ended in charge with a wonderful attack down the right from Katie, Sarah, Leah and Sophie leading to a cross in front of the goals that just couldn’t be finished. The full time score of 2-1 would have been fairer as a draw. A wonderful performance from the whole team and we look forward to challenging Lurgan on home turf for the return game.

Player of the Match was shared between Charlotte Walker and Leah Drysdale.

Well done everyone for all your hard work and excellent effort, we couldn’t ask for more.