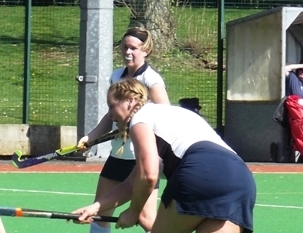 The ladies fourth XI travelled to Belfast Harlequins fourths last Friday night and after a stormy day, the evening was surprisingly calm at Deramore.

The calm weather had its influence over North Down with the first 10 minutes of the Junior Four fixture being dominated by the Comber girls. Quins began showing their attacking potential toward the end of the first half but it finished at half time 0-0.

During the start of the second half it was obvious that the Belfast Harlequins team were not only frustrated but mesmerised at North Down’s team play and determination. Then, a moment of magical play saw  Hilary west send an aerial ball to Lynsey Stevenson-Scott on the right wing from the half way mark.  She took it with pace past two Quins players and played a quick return pass to Marion Sanderson in midfield and then fed a ball to Hilary West who found the back of the net with ease. An absolute determined team effort and well done to Abbie McCague who has risen through North Down Youth to last year playing for the fifths and on Friday making her debut for the fourths and being voted Player of the Match. A well deserved three points for North Down with the final score: Belfast Harlequins 4XI 0-1 North Down 4XI.