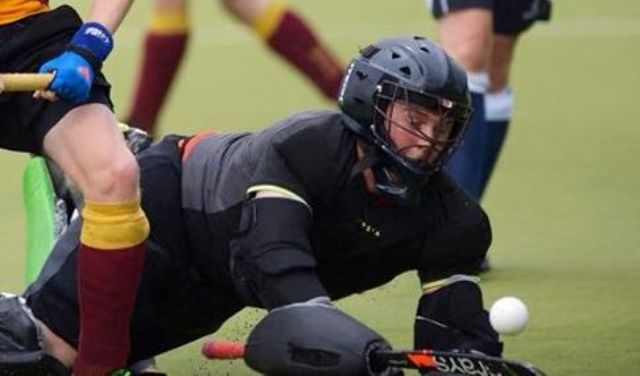 North Down won their first competitive game of the season on Saturday beating Dublin visitors Portrane 4-3 in the first round of the Irish Trophy at Comber Leisure Centre.

North Down opened strongly but it was Portrane who took an early lead.  With the home defence caught upfield the ball was quickly transferred to an unmarked forward who had the simple task of shooting past Rodgers.  North Down failed to play with any real tempo and the visitors defence was not troubled.  However from a short corner the ball was slipped to Gareth McKeown and he equalized from the edge of the circle. North Down began to get on top and Jonny Moore put them in front when he deflected home from close range.  The same player had a great chance to further increase the lead but he failed to make contact with Gilmore’s excellent cross.  Portrane played the ball in behind the North Down defence  but failed to take advantage of their opportunities.

The second half followed a similar pattern with neither team able to lift their game.  Portrane were always dangerous with the long ball out of defence and at the other end North Down were very lethargic.  However the game sprung to life midway through the half when Khan equalized for the visitors from a short corner and then minutes later they took the lead with the home defence in disarray.  Rodgers in the home goal had to be on his toes to make a number of fine saves as the visitors went for the jugular.  With 15 minutes remaining North Down pushed players forward and were rewarded when McKeown scored with an unstoppable shot into the roof of the net.  Five minutes later North Down were awarded a short corner and McKeown’s shot was deflected home by Moore. The defence was able to play out time and allow North Down to progress to the next round.

A much improved performance will be required next week when they return to Premier League action at home to Raphoe.