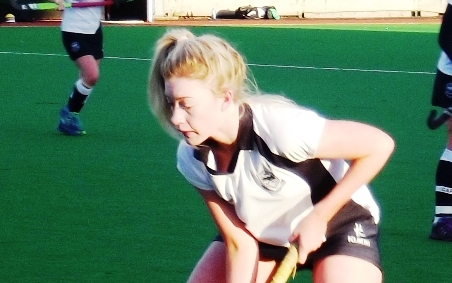 On Monday night the ladies travelled to Mossley in the Premier league.

Following on from Saturday’s game coach, Peter Whyte, emphasized the need to be more aggressive on both circles, if North Down were to get anything out of the game.

Mossley began the game well forcing North Down back from the start. North Down worked hard to keep Mossley at bay but were guilty of giving possession away too easily, after working hard to win it. The defensive effort of North Down, marshaled by keeper Trish Neill,  was excellent as they continually provided no space in the circle for the Mossley forwards and midfielders, limiting them to only a couple of chances.

As the half wore on North Down began to come into the game with good distribution in midfield from Lauren Brown being prominent. The game remained 0-0 at half time.

At the start of the second half Mossley took the lead with an excellent strike on the reverse from the top of the circle. North Down responded immediately and a fantastic run from Rachel Lucas, from near the half way line to the Mossley circle, saw Caitlyn Taylor convert following a scramble in the circle, with the umpire doing well to play advantage. The remainder of the game saw Mossley pushing for a winner and North Down resolutely defending. Given that North Down suffered a couple of injuries the effort put in by the players over this period was first rate. North Down limited Mossley to a couple of chances that were expertly saved by Trish Neill. The last play of the game saw Mossley win a short corner which was well saved by Trish Neill with the clearance completed by Kathryn Sinclair.

An excellent defensive performance from North Down meant they deserved their point from the game. While their play in possession was not as good as it has been in recent performances the entire team gave 100% to minimise the chances that Mossley created.

The game started evenly and continued like this for the remainder of the game with both sides having periods of play were they were on top. North Down had a couple of half chances early in the game, created by good play from Selina Lewis, but could not convert. Ulster Elks gradually came into the game and created some half chances themselves but Trish Neill and her defence kept them at bay, with Kathryn Sinclair and Alex Boyd making a number of timely takes and interceptions, particularly in the last ten minutes.

With the score 0-0 at half time both teams were determined to push on in the second half. North Down’s play from circle to circle was good, with Lauren Brown and Selina Lewis prominent, but they lacked a little bit of aggression in the circle. Elks took the lead from poor play in the North Down circle. North Down responded and Kathryn Sinclair equalised shortly after with a well taken goal from a short corner. At this stage it was anybody game and while North Down continued to play good hockey until the circle they did not create any clear cut chances. They were made to pay when Elks scored from a short corner with ten minutes to go and Elks secured the game shortly after by adding a third.

There was little difference between the two teams but Elks were just that bit more clinical in the circle, and as a result deserved to won the game.