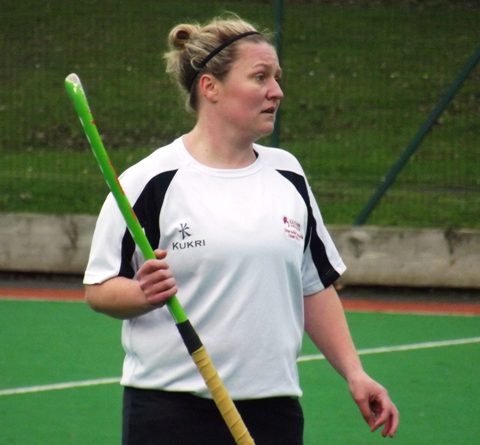 On Saturday afternoon the ladies fifths welcomed Coleraine thirds to Regent House expecting a tough game and looking to avenge a 4-0 defeat in Coleraine at the start of the season.

Right from the off Coleraine came hard at the North Down defence to challenge their strength and expertise. Defenders Kathryn Rogers, Rachel Quigley, Keri Portinga and Siaoa Oscoz determined to push Coleraine back and sent some lovely balls up the pitch to Julie Fisher and Trish Neill. Despite the efforts of midfield and forwards, Coleraine broke through and scored a whopper. North Down renewed their challenge to even the score before half time. Right mid Katie Nelson passed to Julie Fisher who took the ball to the back line and finished with a cracker goal. Just on half time Coleraine won a penalty corned which they converted to go into the break 2-1 ahead.

North Down took to the pitch in the second half with renewed vigour with Katie Nelson and Staci Maxwell feeding the ball up to the forwards. A series of penalty corners eventually resulted in Trish Neill converting to equalise and end the scoring for the day. The fifths now look forward to travelling to play Coleraine this Saturday in the third round of the Minor Cup.