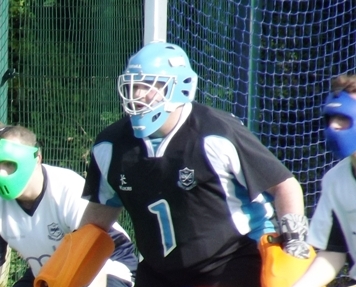 Fresh from last week’s success against Civil Service, and having beaten Queens earlier in the season in the Kirk Cup, North Down travelled to Upper Malone on Saturday in buoyant mood and confident of securing maximum points from the students but a lack lustre display left them returning home deflated and pointless.

The students took the lead after 10 minutes when they converted a short corner.  Poor defensive play allowed Queens to win a further corner from which they were awarded a penalty flick but Andy Coates made a brilliant save to keep his side in the game.  A good cross from the right flashed across the Queens goal but none of the incoming forwards were able to get a touch. Just before the stroke of half time North Down were awarded a corner which was expertly converted by Gareth McKeown leaving the scores level at the break.

A series of missed tackles allowed Queens to take the lead early in the second period and then Coates had to be quick off his line to smother another dangerous attack.  North Down piled on the pressure and pinned Queens back in their own 25 for long periods but lacked penetration.  Queens were quick on the break and North Down had to be careful not to over commit but they did create two clear cut chances.  Firstly McKeown hit a piledriver from midcircle which seemed goal bound but somehow hit the keeper and rebounded to safety and then James Clark found himself in space but his strong reverse shot was the right height for the keeper to palm over the bar.  In the final ten minutes North Down won a number of corners but were unable to get a meaningful shot on target.

The lessons learned from this game were that nothing can be taken for granted in this league as the other leading teams all also dropped points and Queens deserved their 2-1 victory.