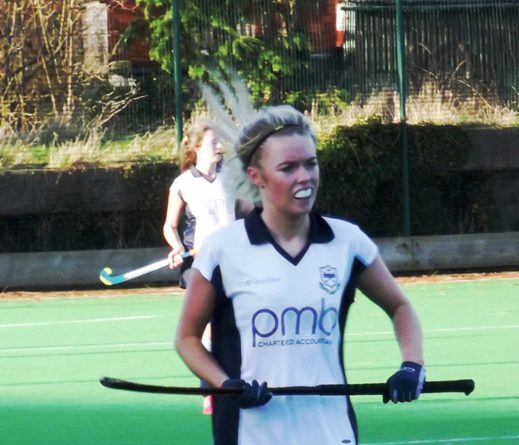 North Down entertained Dublin side Avoca at Comber Leisure Centre on Saturday afternoon in the first round of the Irish Trophy. A welcome break from the league, the Comber side were looking for a result against a team they knew little about.

The game started with a high intensity showing both teams desire to progress in this competition. North Down retained the ball well with good composure from  new signing Kerry Long and Bethan Brittain in defence. The home side had Avoca parked in their own half and eventually got some reward when a good ball down the right from Selina Lewis allowed Lauren Brown to pick the ball up and drive into the circle to win the first penalty corner of the game. Unfortunately this did not amount to anything and the ball was cleared. The first half continued much the same with North Down pushing hard for a goal but good work from Avoca centre back and keeper kept them at bay.

Avoca came out stronger after the break but North Down continued to dictate the game winning a series of penalty corners. However, they were unable to convert any of these chances. A straight strike from Emily Adams came closest but was well saved by the opposition keeper. The last ten minutes were played out frantically with both teams knowing that if the score remained at deadlock, penalty runs loomed.

This was to be the case and no goals in extra time meant it went straight to 8 second penalty runs. After the first four attempts both teams had scored on one run each, Olivia Brown having slotted hers home nicely for North Down. North Down’s final taker stepped up first and missed putting all the pressure on the final Avoca player. She calmly put the ball in the back of the net giving Avoca a 2-1 win to progress to the next round. North Down prepare to play Lurgan away this Saturday taking confidence from the performance but knowing they need to take their chances if they are to get results in the coming season.