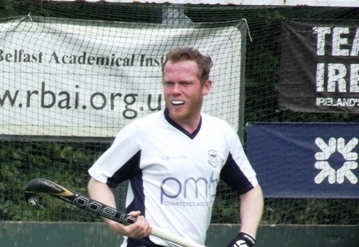 North Down travelled to Queens last Saturday to play their final game in the Kirk Cup and it was also the opportunity for coach McKeown to finalise his squad for the Premier League campaign which begins this Saturday.

North Down opened strongly and put Queens under early pressure.  Within 15 minutes they were 3-0 up and the game was more or less over as a contest. Firstly Jonny Moore broke through and blasted the ball into the roof of the net and then minutes later Gareth McKeown scored with a well executed short corner.  It was McKeown who got the third when he deflected home from close range for his second two goal tally in two games.  North Down took their foot off the gas at this stage and allowed Queens to get back into the game.  Just before halftime they pulled a goal back following some careless play and poor tackling.

The second half was a much more even affair with both sides trying to get control of midfield.  Andy Coates in goal had to be quick off his line on a number of occasions to block dangerous Queens’ attacks.  North Down pressed hard but were unable to create any further clear cut chances.  With 4 minutes remaining Queens were given a lifeline.  A poor clearance from Aaron Saunders allowed them to attack the circle and they scored with a strong shot across goal.  North Down comfortably held out for the remaining minutes to complete their second win in the competition.

North Down’s season begins in earnest this Saturday when they entertain South Antrim in the first league fixture at Comber Leisure Centre with a 4.00 pm hit off.