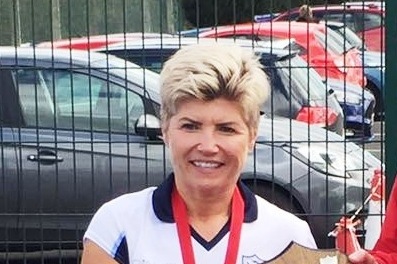 On Saturday the local derby took place between North Down Ladies 5ths and Ards Ladies 5ths at Nendrum College in Comber.  The home defence could not adapt to the conditions and with the pace and skill of the Ards forwards were 2-0 down within ten minutes!

The midfield of Julie Fisher, Kathy Taylor and Kirsten McBride tried hard to get the ball through to forwards Georgie Greer, Sarah Moreland and Diane Boyd who managed to win a number of corners but their shots were thwarted by super quick reactions from the Ards goalkeeper.

Davey Moreland made some helpful suggestions at half-time and the second half commenced with North Down looking like a different, much more determined team and soon Taylor found the back of the net to make it 2-1.  The introduction of Hilary West had an immediate impact and within a few minutes she scored a cheeky reverse stick goal to level the scores. North Down had the upper hand with most of the play, hitting the post 3 times, winning corners and missing an open goal. With a cruel twist of fate, Ards managed to launch an attack in the last few minutes and a deflection and miss hit resulted in them scoring and making the final score 3-2 to Ards although a draw would have been a fairer result.