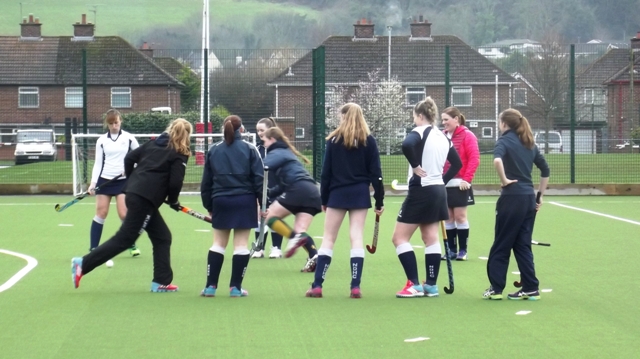 North Down seconds entertained Lurgan seconds at Regent House on Saturday afternoon in a Junior One game hoping to improve on their 3-1 defeat in Lurgan earlier in October .

The first half started strongly for North Down when an early attack almost resulted in a goal in the first five minutes. But Lurgan fought back and eventually went ahead with a goal from Amy Campbell after 28 minutes. The first half ended with Becca Walker practising some amazing baseball skills and clearing the ball up the pitch.

With spirits high, North Down started the second half but Lurgan effectively put the game out of reach with three goals in the next 16 minutes.  In true North Down spirit of not giving up a brilliant ball up the pitch after 64 minutes saw Brittany Hogan one on one with the keeper and a carefully placed strike resulted in North Down clawing back a goal. There was still time for Lurgan to add another with 2 minutes to go to make the final score 5-1 in Lurgan’s favour.

Even though playing a tiring match the Lurgan umpire, former North Down player Kyle Moffett,  was still able to comment on the North Down humour from the back row. A great effort by everyone on the pitch and a really hard fought match!