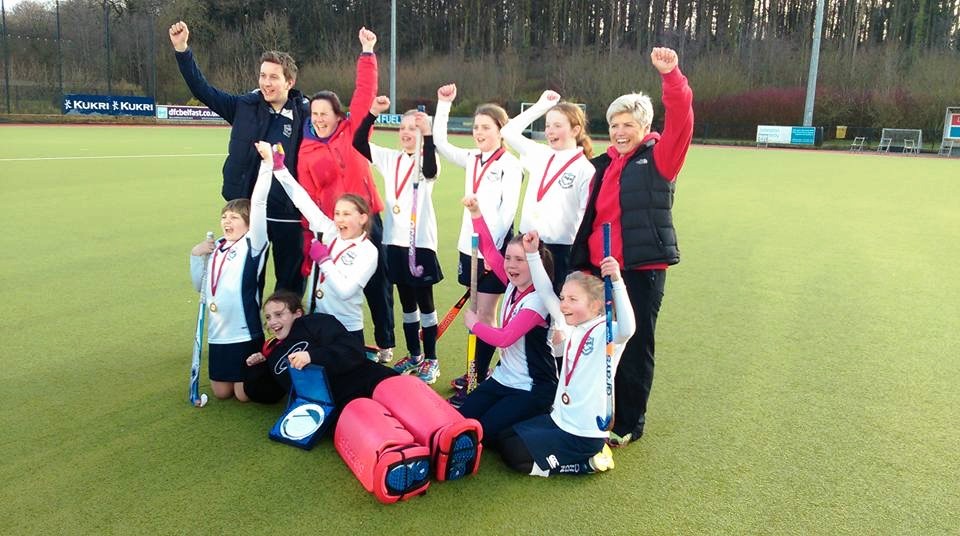 With a 9.30am meet this morning at Garvey and a crammed schedule of matches, the scene was set for an action packed day . . . and what a day it turned out to be !

Our girls had attended four Blitz days in the lead up to finals day.   Their results at these Blitz days had seen them unbeaten in their North Down Area but with all of the junior clubs in Ulster attending Garvey today, they knew they would come up against fierce competition and skilful teams.

In all 34 clubs were listed and split into 6 sections. The morning session was scheduled for group games. Matches are 6 aside and we had five in total against Armagh, Mossley, NICS, Vicorians and Priorians. With a mix of results we qualified for the Plate after lunch.

Again we faced another five matches. Winning 4-0 v Harlequins, 1-0 v Bangor, 2-0 v Parkview, 1-0 v Owls and a scoreless draw v Ballynahinch. With four wins and a draw we finished top of our group and a semi final place v Banbridge, and what an exciting and enthralling match it turned out to be. With end to end play and goal scoring opportunities thwarted from both teams the full time whistle brought with it a scoreless draw.   Golden goal ensued. North Down girls broke the deadlock within 2 minutes of extra time with a fantastic worked goal that was the result of free hit from the right into the circle. The screams and cheers of delight from the girls, coaches and supporters was mighty as the realisation that we had made the final sunk in.

After a five minute break the final commenced against Knock. The nerves of the coaches and supporters were at this stage shredded as you can imagine, but the girls seemed to take it in their stride. This was it, this was the biggie, 12 minutes of hockey and the girls knew they would have to throw every bit of energy they had left into this game, even though they had already played 11 matches. Within two minutes they went a goal down but it was early days. The girls showed great determination and battled away and finally equalised with 7 minutes on the clock. The last five minutes was frantic as both teams had equal pressure and heart stopping goal mouth clearances but it was North Down who finally broke the deadlock with 90 seconds left on the clock when they scored their winning goal !   To say the last 90 seconds seemed like minutes is an understatement for those on the sidelines, but then the final whistle blew and the celebrations began!

With a presentation ceremony, speeches, medals for all the girls and of course a Silver Plate, they all felt like superstars and of course they are very special Under 11 Superstars !

All of these girls were absolutely amazing, they played heart and soul and ran their legs off for each other. They displayed great team spirit and encouraged each other. What a great hockey future they have ahead of them !

Special thanks . . . to all the mums and dads who were there today and who have been so supportive all season at their Blitz days – your encouragement and camaraderie is overwhelming. To Rosemary Cunningham who worked a few miracles to be there (literally!) to Adam Cunningham who spent his 16th Birthday at Garvey today to support the team and coach his goalie sister – Happy Birthday Adam ! . . .and lastly to my awesome partner in crime Kathy Taylor who has helped me coach the girls all season at their tournaments!