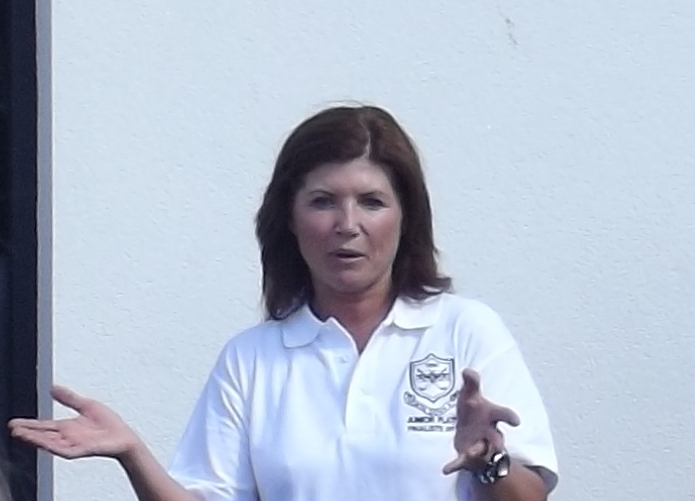 Last Saturday North Down 4ths travelled the short distance across to Ards Leisure Centre to play Ards 4ths in the semi final of the Junior Cup.  North Down had anticipated that this would be a tough match even though they were in the section above Ards and indeed it turned out to be so.  The occasion and warm sunny conditions had brought out plenty of supporters for both teams.
North Down were first to settle and in the opening 15 minutes had the majority of the attacking play.  It was during this spell that they scored.  Lynsey Stevenson made a super run down the right wing to the back line and then crossed a perfect ball into the circle to Julie Fisher who made a first time connection in the goal mouth and placed the ball into the net giving the goalkeeper no chance.  Immediately after the restart Ards went on the counter attack.  Anna Dunlop and Anna Rogers played well and each made good tackles at left and right back respectively while Ann McBride and Maxine Taylor cleared well in the middle.  Play continued end to end until half time with no further change in the score.  Even though North Down won a few penalty corners they were unfortunate not to convert any.
Half time team talks over and both teams gave their all in the next 30 minutes.  North Down knew their one goal lead was a very shallow one and that any lapses and their opposition would punish them.  The visitors looked to increase their lead but quick play from the Ards midfield soon meant that North Down sustained periods of pressure and had to defend several penalty corners.  Thankfully these were well cleared by North Down and in particular Ann McBride and Maxine Taylor who also saved two off the line.  A quick break from one of these defending corners gave Lynsey Stevenson a long ball up the middle.  She collected it and used her speed and made for the Ards circle.  With the keeper and a defender to beat she made a blistering shot and was so unlucky not to score as the ball ricocheted off the post.  With the final few minutes on the clock, Ards didn’t give up and kept their fight up right to the end, pushing North Down all the way, but perfectly timed sweeping clearances from Maxine Taylor at the back and Ashleigh Gorman in great form in goals denied Ards their equaliser.  North Down breathed a sigh of relief when the final whistle blew giving them the 1-0 victory and a place in the final at the end of March v Ards 3rds.  All in all a very tight match – and one of the toughest games the 4ths have had all season !
Well done girls – a great squad performance – everyone worked so hard and gave heart and soul !  Player of the match was Maxine Taylor who had the best game of her season and made outstanding clearances.  Many thanks as ever go to Krista Blanchflower for a super job umpiring !