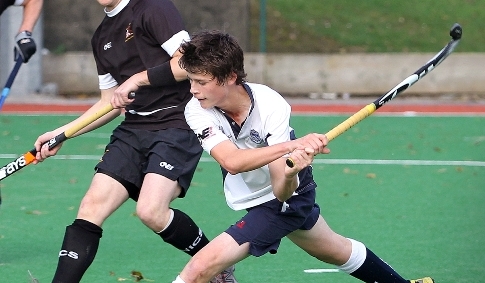 On Saturday, North Down for the second year running made the long trip to Cork to play Bandon in the quarter final of the Irish Trophy.

Throughout the game Bandon had the greater share of possession but it was North Down who created the more goal scoring opportunities.  Play was concentrated in midfield with neither goal under any real threat in the early stages.  Then after 15 minutes North Down took the lead.  The ball was cleverly slipped to Chris Speers who found lots of space at the top of the circle and instead of shooting he passed to Tom Donnan who scored.  Andy Forrest had a great chance to add to the score but his effort went wide.  North Down were having difficulty stopping corners and wasted a number before Speers shot over from a well worked effort.  Until halftime the visitors’ defence looked secure and prevented any real attacks on Gareth McBride’s goal.

In the second period Bandon upped their game putting more pressure on North Down.  Ten minutes into the second half Michael Black who had a solid game gave the ball away needlessly and Bandon played the ball quickly into the circle for their winger to easily beat McBride.  North Down exerted pressure and Forrest had another chance to put the visitors back in front but the keeper remained calm and forced him to shoot wide.  Then Donnan received the ball on the right and wriggled his way into the circle before hitting a reverse shot into the corner of the net to put North Down back in front again.

With 10 minutes remaining Bandon won a corner and their attempt at goal went in off McBride’s pads for another equaliser.  There were no further scores and the game went to extra time with a silver goal to decide the issue.  Within a minute Bandon scored.  Jordan McKee failed to make a tackle at the half way line and the ball was quickly transferred into the circle and the Bandon forward beat McBride to the ball and slotted home.  In the final three minutes North Down threw everything into attack but were unable to breakdown the Bandon defence and with Bandon leading 3-2 at half time in extra time the silver goal was decisive.

North Down now play their final league game this Saturday away to Queens but may have to await until April for their crucial playoff game to decide the final Premier League spot for next season.