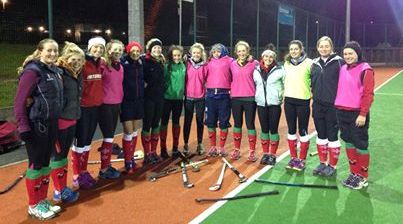 North Down travelled to Stormont on Sunday to play PSNI in a rearranged league fixture with the visiting supporters speculating if this was North Down’s first ever official Sunday game.  In wet blustery conditions North Down completely overran a police team which had achieved some good results of late by winning by the margin of 12-2.

An Andy Forrest hattrick in the first 15 minutes provided the platform for victory and although Barnes pulled one back for the police with a fierce reverse shot from a narrow angle it did not take long for the visitors to put the game out of sight.  Mark Forrest, Gareth Bailie and Simon Watt with two all scored to give them a commanding 7-1 lead at half time.  At 5-1 there was an opportunity for PSNI to get back into the game but ace marksman Chris Barnes just missed out as he drilled a corner onto the crossbar.

The second half followed a similar pattern with North Down on the ascendency although their play in the final quarter of the pitch lacked the penetration of the first period.  Watt and Mark Forrest went on to complete their hattricks but then from a rare PSNI attack they won a corner which Barnes dispatched into the net.  Phil Wilson finally got onto the score sheet and Bailie completed the scoring for the visitors.

This victory puts North Down top of the league going into the Xmas break but as coach Whyte emphasised after the game they must maintain their fitness levels over the holidays if they are to keep the pressure on fellow contenders Newry and Portadown.  Thanks to a number of the ladies first eleven who braved the elements and gave their support despite suffering from the previous evening’s festivities at their annual Xmas dinner!