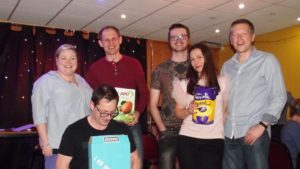 There was a great turnout for the Annual table Quiz championship at Comber Rifle Club on Saturday when Universally Challenged became the first team to retain their title following a night long battle with second placed Revarmy and Mr Brown’s Girls (I made the name up but as good as any) who were third.

Our thanks to all the local Comber businesses who supported prizes for the winners, runners up and for the ballot.  McBrides on The Square, Indie Fude, The Goose, Peppercorn Bistro, Horner’s Pharmacy, The Tandoori, Omeya Day Spa, Mauds, The Training Room, Supervalu and Tesco Express and from Lisbane The Old Post Office.

Thanks to all who turned up, in particular all the non members for their support.  Also to Ian Shields for a well balanced set of questions, his demure assistant Robin but most of all to Sam Brown for all the work he put in to make the event a big success.  As for the karaoke, I can also do Octupus’ Garden but wasn’t asked.