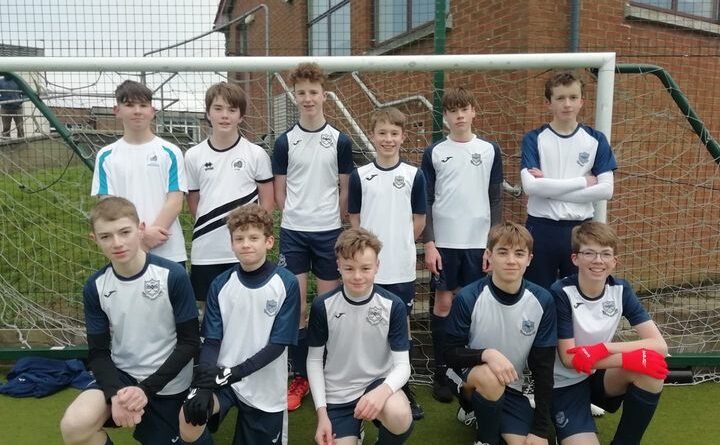 A great match against our friends at Ballynahinch on Sunday.  They were let down by their keeper late on so we agreed to play 8 outfield players. We also agreed to give the boys a good run out with a 4 x 15mins match, not sure some of the fans thought that such a good idea, it was dry though…

With a small squad to pick from Hinch had to field some U11 players to make up the numbers. With a full squad North Down were always going to be the stronger side and so it turned out.

As always playing without a keeper presents easier opportunities for both teams to score and more reliance on a solid defence especially around the D. North Down had many opportunities in the first half but the very small goal seemed to be difficult to find from range!

Moving into the 2nd quarter both teams seemed to move up a gear and it wasn’t long before the scoreline was 2-1 in favour of ND.

In the 3rd quarter and the change of ends gave ND a bigger target but the Hinch boys were putting in some great defensive play and some fantastic counter attacking. By the end of the quarter the gap remained, 3-2 ND.

The last quarter and having had 3 chats from Harry the boys started to string passes together but still couldn’t get that final touch. With 5 seconds left on the clock and some simple pinball passing the boys had the ball in the back of the net! 4-2 was probably a fair result and the effort from the Hinch boys really did hold back our boys at times.

All our boys played very well, the back line of Eoin and Daniel, being well marshalled by Finn in the centre, the 2 Paddys as always link up well down the line. Great play up front from Joel and James, plenty of running from Andy, Ollie, Sam and Reuben providing those through balls. Marked improvement in Daniels play today and a great advertisement for the boys to take advantage of the open invite to Wednesday night junior mens training (taken by Ben Palmer former U15 coach so a very welcoming and encouraging coach).

Thanks to Janice at Hinch, to the parents especially those withstanding the wind chill and finally to Harry for his coaching.