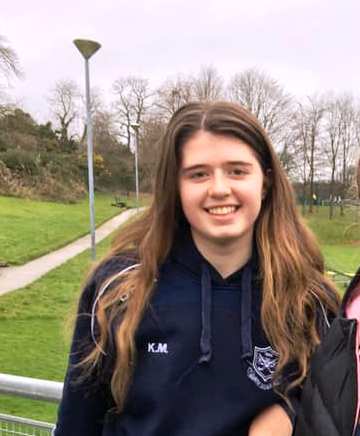 The ladies thirds made it two out of two this week with a good 3-1 away win over Dromore thirds.

The match was tough from the get go.  The Dromore ladies were determined and very fast and dangerous in their breaks, North Down were slow to get into the match and seemed to struggle with the sandy surface. Dromore had a penalty corner in the first couple of minutes which was well defended by Kathryn Rodgers and her team of strong defenders. Shortly after this Dromore had a quick break and a two on one against the keeper gave a good goal and resulted in North Down being 1-0 down. This was all that was needed to encourage a quiet North Down to get going. With a series of great one twos in midfield and breaks from Connie Magee and Amy McMullan the North Down ladies were unlucky not to equalise at the end of the first quarter. Connie hitting the crossbar from a cracking reverse shot.

The thirds kept their heads and continued to play the good passing team hockey that is so enjoyable and successful.  In the second quarter a lovely pass from Rebecca Brown through Katie Migan set up Amy McMullan for the equaliser, with a taste for it now established she soon put the second goal in.

The team hockey continued a solid pass from right back Rebecca Brown to centre back Kathryn Rodgers who hammered the ball forward to left mid Katie Migan who slipped it to centre forward Amy McMullan who found right wing Sarah Taylor who dodged a defender and confidently slapped the ball into the net to make it a half time score of 3-1.

The thirds then stopped playing the short passing hockey and let Dromore back in the game.  They picked off our long passes with ease and counter attacked ferociously, luckily Judith Orr and Rachel Cairns were rarely beaten in defense interrupting the rapidly increasing Dromore attacks. Ali Millar was formidable at sweeper clearing everything that entered the circle aided by an on form Grace Davis in nets.

The second half was very equal between the two sides with both having chances. Some lovely play in the midfield from Laura Murray linking nicely with forward Ellie Moore set up more chances which North Down couldn’t manage to capitalise on. Well done to the North Down girls who gave everything to retain the score and fought to the last second to get a super win.

Burch Autos Player of the Match was shared between Connie Magee and Katie Migan.