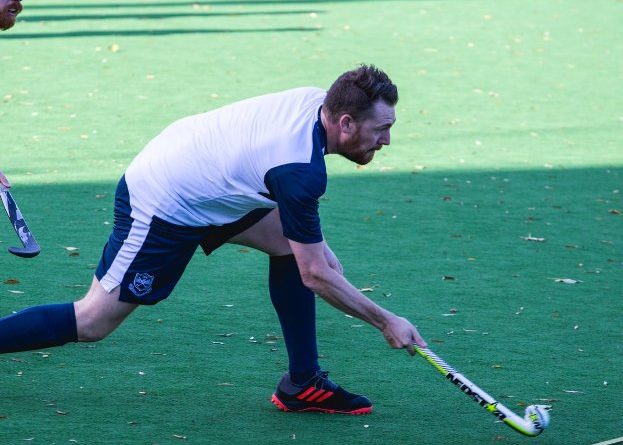 The game was underway, the hosts dominating possession with Mockford, Donnan, Walls and Pyper marshalling the central spine of the side. It wasn’t long before the impressive start paid dividends when Jack Bond tracking back made a tackle just inside the attacking 25.  The ball broke loose at the top of the circle for Pyper to crash home to open the scoring. North Down soon made it two.  A bursting forward run by Donnan, a clever one-two with Pyper and a cheeky finish past the Queens keeper. Smelling blood, the Comber men made it 3-0 when great control, skill and a superb roof crushing reverse by Greg Bell gave the Queens keeper no chance again. An easy first quarter team talk followed but the second quarter had complacency written all over it and Queens started to get back into the game picking out meaningful passes. The attack now on the home defence was real and Jamie McAuley made some great saves with several other reverse strikes going just past the post. Queens got back into the game with a smart finish but 1 minute later great work and an even better finish from Andy McKee made sure the three goal advantage was kept at half time.

Queens continued to up their game and made it 4-2 with a great counter attack starting from their own circle and with no more than 4 passes made their way past McAuley. With their tails up it was soon 4-3 with a converted short corner on 45 minutes to round off the third quarter at 4-3.

Ten minutes from time it appeared as if all the visitors’ pressure had paid off when they were initially awarded an equalizing goal only for it to be ruled out following an umpires’ discussion.  It was all hands to the pumps as North Down tried to hold out the students and just managed to do so with Queens unable to take advantage of a controversially awarded penalty corner in the dying seconds.

Burch Autos Man of the Match was Sam Pyper