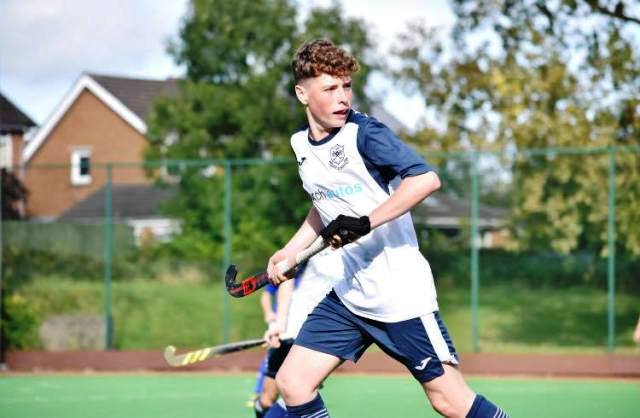 North Down got their hopes of a top four position in the Premier League back on track when they comfortably beat Raphoe 6-3 at Comber Leisure Centre on Saturday.

With all the early morning rain the pitch was playing fast and this suited North Down’s game perfectly. They began at a fast pace which caught Raphoe unawares and two early strikes gave them a 2-0 lead after 5 minutes with goals from Philip Wilson and Scott Moore.  In a rare attack Raphoe played a harmless looking overhead into the North Down circle but poor defending allowed Raphoe to reduce the arrears. Just before the end of the first quarter North Down regained their two goal advantage when Michael Black burst into the circle and crashed the ball into the back of the net to make it 3-1.

North Down continued to dominate in the second quarter and Gareth McKeown added a fourth when he converted a penalty stroke following a deliberate foul by a Raphoe defender. North Down then notched number 5 when Phil Templeton converted a short corner.  To their credit, Raphoe kept fighting and were rewarded when they attacked along the byline and when the ball was slipped to mid circle no defender was close enough giving the Raphoe forward the opportunity to reduce the arrears before half time.

The third quarter was evenly contested with both sides exchanging goals.  A poor clearance by the Raphoe keeper allowed Robbie Davidson to pick up the ball and hammer home from the edge of the circle but at the other end Raphoe attacked down the right and crossed for the centre forward to reduce the arrears.  With North Down temporarily reduced to 9 players they maintained their shape and kept the Raphoe forwards at bay.  Another Raphoe goal at this stage could have resulted in a tight finish.

In the final quarter and after a glut of goals in what went before, North Down back to full strength were happy to hold onto their three goal lead and restrict Raphoe to few scoring opportunities.

Burch Autos Man of the Match was Michael Black