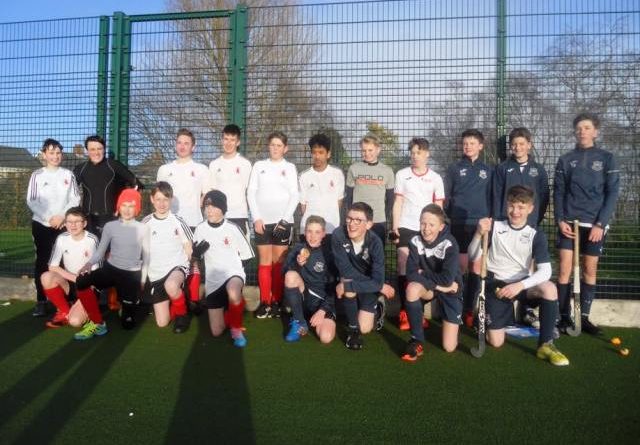 The under 15 boys had a T2 league game against Raphoe on Sunday afternoon on a cold but dry day at Regent House.

Our boys started out well with a number of shots at or at least towards the goal, Callum, Scott and Thomas with a number of chances. Raphoe did start to come back into it after a slow start (to be fair they had played a Bangor ‘B’ team in the morning) our defence of Oliver, Daniel and Matthew held on even after a couple of penalty corners for Raphoe. No goals during the first half (we agreed 2×25 with Raphoe).

After Ben’s half time chat about passing the ball more, Callum scored with a nice reverse shot. More of a physical game unfolded during the second half but the boys weren’t deterred and worked hard. North Down were starting to spread out and great runs from Finn and Rory added pressure. The second goal was straight out of the simple pass and score book with Thomas finishing it in the circle. The match finished 2-0 to North Down.

Alex as always kept a great goal and with plenty of communication at the back. Thanks to parents as there was a cold wind, to Raphoe for travelling and being competitive yet friendly. Well done boys, onwards to the next match!