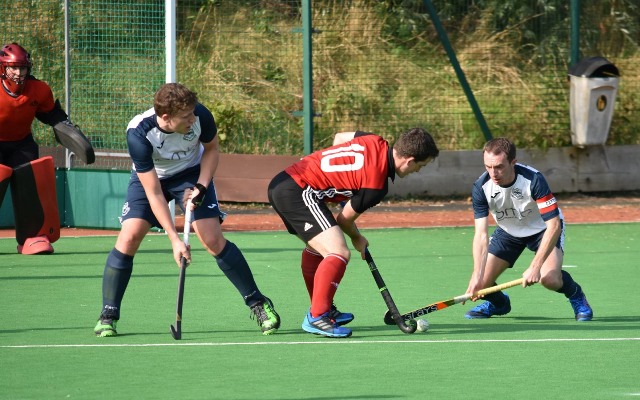 North Down welcomed South Antrim to Comber Leisure Centre last Saturday for the first competitive game of the season in the season opener Kirk Cup.  For the first time, all local hockey right down to junior level will now be played over four quarters.

Both sides tried to play fast open hockey and it was South who made the early running without putting any real pressure on Darren Rodgers in the home goal.  North Down soon took control with their quick passing game.  A slick move created a great chance for Josh Gilmore in front of goal but he was unable to get the vital touch.  Shortly afterwards Gilmore found himself with a one on one with the goalkeeper but the keeper made a fine save.  North Down’s pressure finally told when James Clarke made a strong run down the left and with a strong reverse cross found Robbie Davidson diving in at the far post to put the home side in front.

North Down continued to dominate in the second quarter and it was Davidson who put the home side two ahead with his second of the game after being set up by Jamie Orr.  Rodgers was then called on to make an excellent double save  to keep his goal intact to keep the score at 2-0 at half time.

In the third period South began to put the home defence under pressure.  They reduced the arrears when they converted a short corner however North Down quickly restored their two goal lead.  David Morris made good space on the left and his rasping shot was deflected home by Orr to make it 3-1.  This seemed to spur South into action and in the final quarter they put the North Down defence under great pressure.  They were awarded a penalty stroke when a defender was alleged to have stopped a short corner from entering the net but Rodgers was up to the task and made a fine save low to his left. South Antrim then won a series of corners but these were well dealt with by the home defence.

With play becoming more frantic players from both teams received yellow cards which seemed to disrupt the flow of play.  With four minutes remaining South were awarded another penalty when the ball was deflected onto a defender’s leg and this time there was no mistake.  In the final minute South got the equaliser which their pressure deserved and it finished at 3-3.

North Down will be regretting their early misses as the game could have been out of South Antrim’s reach at half time but in the end were happy to settle for  a point.