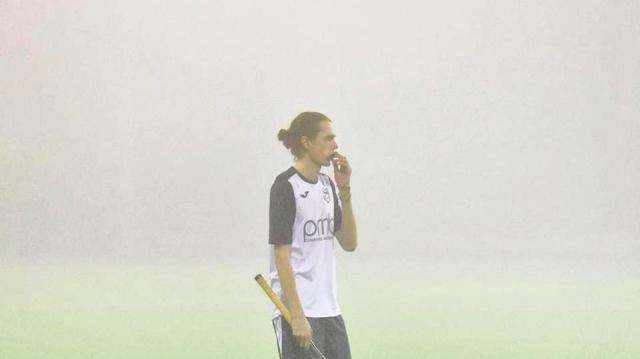 In atrocious weather conditions North Down entertained Inst in the second leg of the 2nd round of the Anderson Cup on Wednesday evening at the leisure centre. The umpires decided to let the game get under way despite the heavy fog and the locals were entertained to another goal fest.

Trailing 5-2 from the first leg and without 6 of the players who were in the squad for the Irish Trophy game North Down knew they were going to be up against it. However those players who were brought in gave their all and it was only in the last 15 minutes that Inst took control and won comfortably by 6-1.

Starting with a squad of 14 North Down were soon in trouble when Magee pulled a muscle and was unable to take any further part. North Down took the lead after 10 minutes. Clark made a strong run and passed to Moore who in turn found Gilmore and he made no mistake from 6 yards.  Inst fought hard to get the equaliser winning a number of corners but McAuley made some fine saves.  However he was eventually beaten from a corner which brought Inst level midway through the half.

Templeton had been delayed by the fog when driving up from Dublin and arrived just after half time.

Just as it looked that things may get better Moore received a head injury and he had to leave the pitch to receive stitches.

Inst scored after 5 minutes into the second half and then got a third midway through the half. With North Down tiring, Inst were able to find space more easily and scored three further goals in the last 15 minutes.  In the end a very comfortable victory for the visitors and we wish them well in the semi final.

A big thank you to the umpires who allowed the game to take place and for the understanding way they umpired the game.