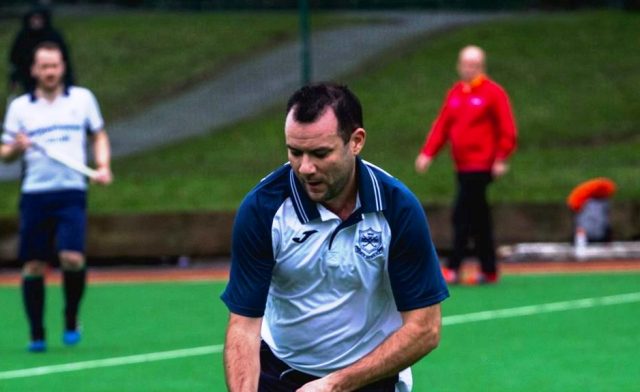 North Down fifths unbeaten eleven game run came to a end last Saturday with a bump in a 5-1 thrashing at the hands of league rivals South Antrim fourths at Friends School Lisburn. A strong but fair South Antrim deserved the win wholeheartedly in atrocious weather conditions which accounted for most of the rest of the Saturday hockey programme.

A quick start from the home side saw them 1-0 up with the North Down side looking like they wished they were back in the dry changing rooms. North Down gradually got back into the game and levelled midway through the first with a crisp short corner finished by Peter Shields.  Sadly that’s where the good news ended for the visitors. Very uncharacteristic mistakes throughout the team allowed South Antrim into the North Down circle with ease and within 10 minutes the game was over as SA went 4-1 unopposed. North Down looked shell shocked. A stern talking to at the interval was inevitable but tempered given the very difficult playing conditions.

The second half saw a little improvement from North Down but not enough to make any headway into the South Antrim lead. North Down did have a few chances in the second half but none were taken and no pressure put on South Antrim who scored a short corner goal with 20 minutes to go and that was that. The undefeated run which stretched back almost a year into last season was at an end.  A short week with a game against Instonians fourths on Black Eye Friday means a quick shot at redemption before the League Cup Final on 29 December.