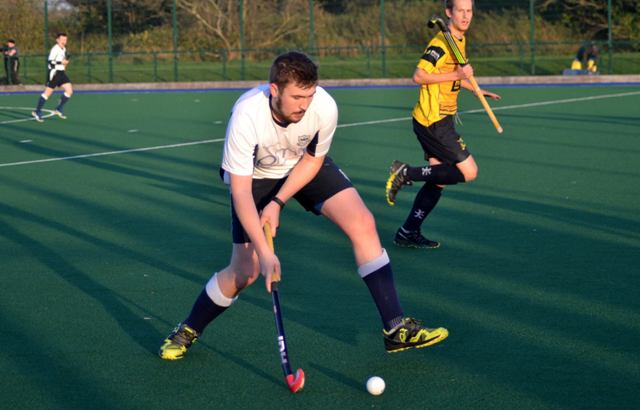 North Down having beaten Portadown two weeks ago in the Irish Trophy were looking forward to last Saturday’s Premier League encounter in Comber as both teams battle for a top seven slot in the league. There was little between the teams then and everyone knew this would be a tight encounter.

Phil Templeton broke from defence and was obstructed when about to shoot but despite appeals for a penalty the umpire awarded a corner which was cleared. Portadown got the early breakthrough when the ball was played from the left and the winger had a simple tap in.

North Down went all out for the equalizer and a swift passing movement involving three players saw Josh Gilmore score at the far post. Almost immediately, Gareth McKeown gave the home side the lead when he unleashed an unstoppable half volley from the top of the circle  .Midway through the half North Down increased their lead.  Sloppy defending ended with North Down being awarded a penalty and McKeown stepped up to dispatch the ball into the corner of the net to make it 3-1.  North Down looked very comfortable at this stage but Portadown had other ideas.  They pulled a goal back on the stroke of half time and then equalized a minute after the restart.  Lack of concentration by North Down at the restart has cost them on a number of occasions this season and they must learn to give 100% concentration for the full game.

Midway through the second half Gilmore put them back into a 4-3 lead when he shot home from mid circle.  Back came Portadown and the centre forward beat Rodgers with a strong shot across his goal to again draw level.  Ten minutes remaining and both sides were pushing for the winner.  Gilmore won the ball and created space for himself to blast a reverse past Knipe to complete his hattrick.  Both sides won corners but it was North Down’s routine that brought success. The ball was switched at the top of the circle and Tom Donnan, making a return from illness, flicked into the roof of the net.  Rodgers was called upon to make two fine saves to keep the eager Portadown forwards out but with the last hit of the game slack marking allowed the visitors to reduce the arrears.

This was an exciting game for the neutrals with North Down winning 6-5 and marked a temporary end to the season for Paul Ritchie who has been such an influential player since his return to the fold.  He now departs for an enjoyable few months ski instructing and North Down look forward to his return for some end of season fixtures.