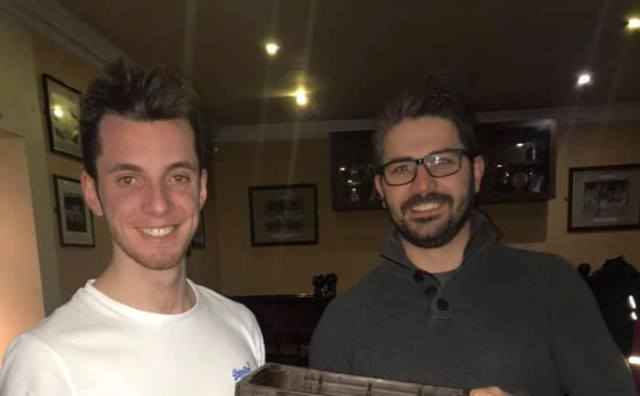 North Down fifths entertained Antrim thirds in the semi final of the J5 League Cup at Comber Leisure Centre last Saturday and it turned out to be a messy affair with plenty of cards, none of them of the Xmas variety, being handed out.

North Down scored after only 2 minutes through Greg Bell and a rerun of the 8-1 rout two weeks earlier was on. Unfortunately, uncharacteristic mistakes at the back allowed Antrim back in the game minutes later. Good play from North Down and sharp passing through midfield got the ball down the left and the cross found Matt Murray who finished slickly.  Yet again poor defending cost the home team and Antrim got a deserved equaliser on 20 minutes. The sage influence of Peter Shields calmed his side down in the face of an ill disciplined Antrim team and eventually good hockey paid off with a fantastic break into the circle and a superb finish from Ben Bond to make it 3-2 at half time to North Down.

Antrim came out of the traps quickly in the second half and their lack of discipline soon ensured that two yellow cards reduced their numbers.  A ridiculous challenge from the Antrim captain which was a borderline red card was followed by a yellow for dissent to a veteran Antrim defender.  Unfortunately this didn’t take the sting out of the game and more cards for both sides appeared including a green for skipper Curtis Hastings.  Despite the refusal of Antrim to play hockey, North Down continued to plug away scoring a fourth through Greg Bell on 55 minutes.  Following a coming together in the North Down defence good old fashioned mayhem ensued, the Antrim goalkeeper making his way from the far end of the pitch to get involved. The result of the 14 man melee was a red card for each side, one definitely deserved, the other very harsh. The 10 man teams saw out the final 10 minutes with North Down dominating play and getting a 5th and final goal through Greg Bell.

The result was the main thing.  A 5-2 win and a League Cup Final booked for 29 December but despite being entertaining, hockey was certainly not the winner.