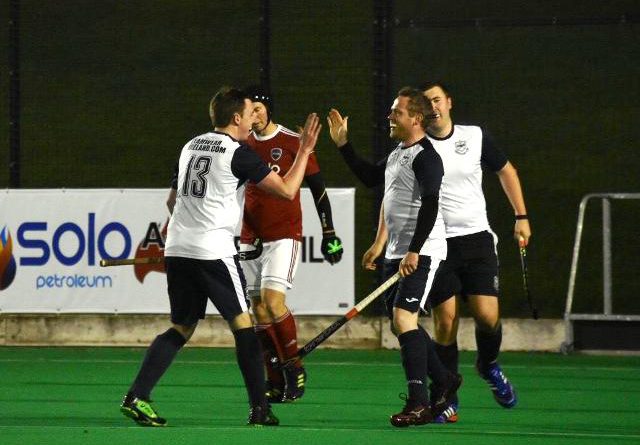 North Down completed their Kirk Cup programme on Monday evening with an away trip to Cookstown against the IHL side. In an entertaining game for the enthusiastic crowd the home side came out victorious by the margin of 4-2.

North Down without three regulars played some of their best hockey of the season.  They showed no fear of their opponents and attacked at every opportunity causing many anxious moments in the Cookstown defence.  North Down got the perfect start scoring after 3 minutes with what was probably the best goal of the game.  A quick slick passing movement involving five players cut the Cookstown defence open and Josh Gilmore slotted home.  Cookstown leveled the scores after 13 minutes from a well rehearsed short corner routine.  Rodgers made some fine clearances as the Cookstown forwards homed in on goal. The defence brilliantly marshaled by Ritchie and Linter used every opportunity to set up attacks.  Cookstown took the lead midway through the half when a midfielder ran on to a loose ball and slotted past Rodgers.  To their credit North Down kept plugging away and were awarded a number of corners.  McKeown’s effort from the first was blocked but the second flashed into the net. With a minute to go to half time North Down gave the ball away in midfield and with turnover ball Cookstown won a penalty corner from which they took the lead to make it 3-2 at half time.

The second half followed a similar pattern with both sides playing fast open hockey.  Cookstown extended their lead 10 minutes into the half.  North Down defence got drawn out of position and the winger had a simple task to tap home at the far post.  Linter with his up and overs was causing the Cookstown defence problems and both McKeown and Gilmore  almost created chances.  Rodgers at the other end had to be on his toes to make a number of important clearances.  Both sides fought hard to the end but no further goals were scored.

We wish Cookstown good luck when they take on Annadale in the semi-final on Sunday. It’s back to the Premier League on Saturday when North Down entertain Harlequins at Comber Leisure Centre at 2.30 pm.