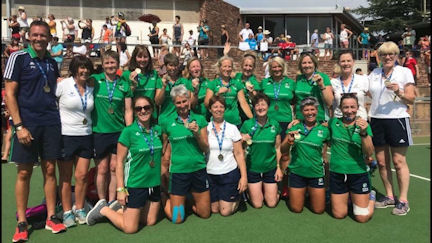 Julie Fisher featured in the Womens 50s squad that fnished top of their group after wins against Argentina, Chile and USA. Ireland faced the USA again in the quarter final winning 2-1 and saw off Scotland in the semi final, with a  2-0 victory to setup a final against Australia. The final was a fiercely competitive game but after scoring a short corner early into the game, the Irish ladies held on for a famous win and gold medal.

Stevie Magee and Allen Irwin’s were part of Mens 45s squad that finished a very respectable 5th. In the group stage they won 9-0 against Italy, 3-0 against Ghana and lost 1-0 to the Netherlands and 3-0 to England. This saw the Irish men through to the quarter final where they were bravely defeated by Spain 2-0.

Great performances all round, you did our club proud!