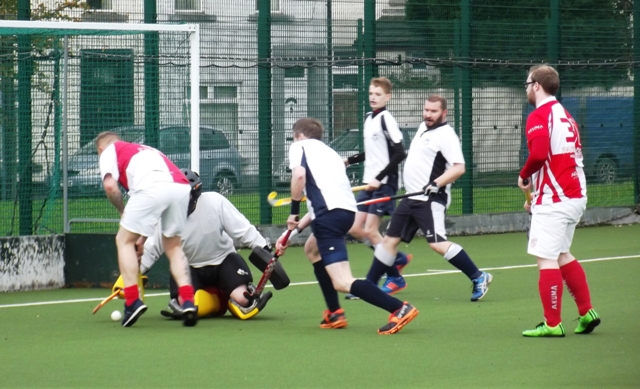 The reformed fifth eleven in their second league match faced, on paper, a much stronger Parkview first eleven at Regent House on Saturday.

The first 10 minutes was to set the tone for the whole match. North Down had full possession battering the deep defending Parkview and their dominance paid off with a poacher’s instinctive goal from young Andy Linter. A second goal before half time from Simon Wilcock gave the scoreline the reflection it deserved, however the highlight of the first half belonged to the visitors’ umpire.  A crashing bodycheck by a Parkview defender in the circle had the spectators mulling over the decision: surely a penalty stroke and either a red card or 10 minute yellow for the defender?  But no, a free out was the verdict to the general astonishment of all.

The second half continued in the same vein as North Down kept knocking at the door of the Parkview circle time and time again prompted by the dominant Ryan Millar in midfield. However to their coach’s frustration some lack of concentration at the back invited Parkview back into the game but a quick footed Peter Craig in goal smothered Parkview’s only shot on target. Two goals in the final 10 minutes from the returning Ryan Millar and Peter Bond secured the fifths first win of the season and provides great hope for the future of North Down with brilliant performances from young Curtis Hastings, Curtis Hunter and assured games from Ryan Millar, Paul Revill and Peter Bond to set up the excellent win.