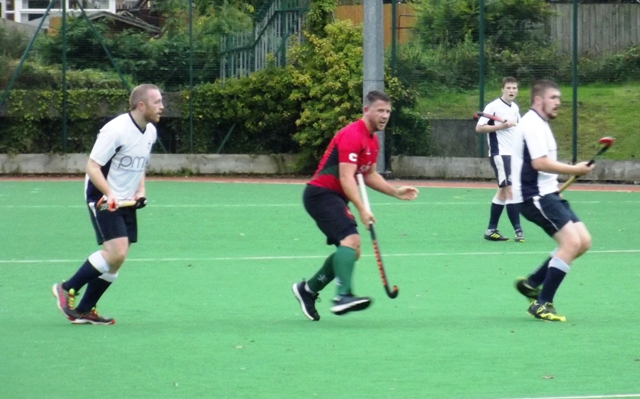 North Down entertained Civil Service in their first competitive fixture at Comber Leisure Centre last Saturday.  It was in the traditional season opening Kirk Cup competition and they were defeated by 3-1.

North Down had the greater share of possession and won the short corner count 7-4 but it was the clinical finishing of Chris Barnes that separated the sides at the end.

North Down had an early scare when the umpire allowed Service to play advantage and with the defence out of position the Service striker smashed the ball against the bar with Andrew Coates in goal well beaten.  Both sides probed for openings and North Down won a corner but it was taken off the line by a defender.  Another North Down corner came to nothing and then from their first corner Service took the lead with Barnes scoring off Coates pads.  Within minutes Service were 2 up when Barnes reversed a shot into the corner of the net after being given too much space in the circle.  From a Service breakaway Coates made a fine stick save when he was first to the ball as it entered the circle.

An early corner in the second period saw Barnes complete his hattrick when he gave Coates no chance with a well placed flick.  North Down piled on the pressure but found Hamill, the Service keeper, in fine form although too many of the North Down efforts were wide of the target.  Gareth McKeown was unlucky when his effort rebounded of the post but eventually with 7 minutes remaining North Down reduced the arrears.  Andrew McKibbin, returning to North Down after a spell with Annadale, burst into the circle and drove the ball into the corner of the net.

The North Down side showed a number of changes from last season and coach McKeown will be keen to see the team settle in before the League campaign begins.